The full artist line-up has now been announced for next month’s unique cultural event to mark the centenary of the Battle of Manchester Hill – a battle that in one day took the lives of 79 men from the Manchester Regiment….reports Asian Lite News 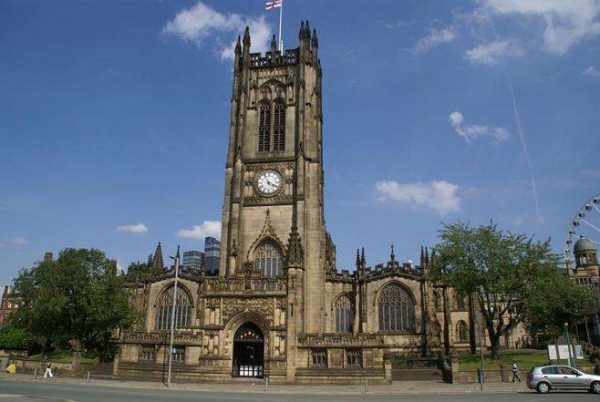 ‘Manchester Hill Remembered’ will take place on Friday 13 April at 8 pm, at Manchester Cathedral.
Presented by Brighter Sound, Manchester Histories and Manchester City Council, the multi media event, involving over 60 artists and performers, will be an immersive, atmospheric and poignant performance of new music, poetry, spoken word, and digital projection.
Prominent Manchester musicians Stuart McCallum (The Cinematic Orchestra, The Breath), John Ellis (The Cinematic Orchestra, Lily Allen), Luke Flowers (The Cinematic Orchestra, Corinne Bailey Rae) with singer-songwriter Liam Frost and composer Katie Chatburn, will collaborate with a group of emerging talented local musicians and spoken word artists Young Identity featuring Isaiah Hull, in an intensive collaborative artist residency to create and compose new music, songs and poetry specially for the event.
Digital multimedia artist Rebecca Smith of Urban Projections will provide a stunning visual backdrop to the event with digitally mapped projections exploring musical themes and archive materials.
The event will also premiere newly commissioned works from prize winning poet Michael Symmons Roberts and singer-songwriter Seaming To.
The accompanying performance group also includes members of the King’s Division Brass Band, Northern Voices (a Royal Northern College of Music based a cappella choir) and strings from Manchester’s Ignition Orchestra – all playing and singing specially composed and arranged music.
Debra King, Director of Brighter Sound, said: “This is a great opportunity to reflect on the events surrounding the Battle of Manchester Hill in 1918 – to involve the musicians, poets and artists of today’s Manchester and for them to represent this piece of little-known about history in a new piece of work, which we hope will make for a truly memorable commemoration.
“Manchester Cathedral provides a wonderful space for such a special event, and we’re pleased to be able to give the chance to new musicians to collaborate not only with established artists, but also with the prestigious King’s Division Brass Band, and other orchestral and choral musicians.”
The Manchester Hill Remembered event will build on work led by Manchester Histories to take a fresh look at the events and people involved in the Battle of Manchester Hill.
Working with residents, local groups and volunteers at recent workshops hosted by Manchester Central Library, the workshops have explored the facts, stories and loss felt through the stories of individuals.
Karen Shannon, CEO, Manchester Histories, said:  “Having the chance to contribute to the creative process and work with local groups and partners to bring the story of the events of the Battle of Manchester Hill to life has been very rewarding.
“We’re hoping to be able to develop this work further in the future to ensure even more people are aware of this significant moment in our collective histories.”
The Battle of Manchester Hill took place on March 21 1918 in an area of raised ground just outside Saint-Quentin in northern France.  It is a little-known about battle that proved to be a forerunner to the last 100 days of the First World War.
The unique one-off contemporary performance on the 13th April will convey the hidden story of the battle, the sacrifice made by those who fought and lost their lives there and its significance in marking the beginning of the end of the First World War.
The hill had earned its name after being captured by the 2nd Battalion Manchester Regiment the previous year.  The Regiment continued to hold and defend their position until 21 March 1918 when the hill was attacked by the German army.
Despite a heroic defence by the 16th Battalion of the Regiment most of the battalion were dead or wounded by 4 pm that day.
Out of 8 officers and 160 men who went into action on the hill, just two officers and 15 other ranks returned to British lines.  Of the remainder, 79 men were killed and the rest either wounded and subsequently taken into captivity, or taken directly as Prisoners of War.   Among those who lost their lives was 29 year old Lieutenant-Colonel Elstob, who led his troops selflessly into battle with the words ‘Here we fight.  Here we die.’
One hundred years on, the actions of the valiant soldiers of the Manchester Regiment are to be remembered both here in Manchester and also in France – at the hill that still bears the name, Manchester Hill.
Councillor Tommy Judge, lead member for the armed forces, Manchester City Council, said: “The cultural event at Manchester Cathedral promises to be both stunning and memorable, and it will help ensure the story of the battle and the sacrifices made by those who fought in it and those who lost their lives, is remembered.”
The event has received public funding from the National Lottery through Arts Council England and Heritage Lottery Fund. It is also supported by The Duke of Lancaster’s Regiment through the Armed Forces Community Covenant, Manchester Cathedral, and Manchester City Council.
Brigadier Peter Rafferty MBE, Colonel of the Duke of Lancaster’s Regiment, said:  “The defence of Manchester Hill by the Manchester Regiment is nationally recognised and a significant event both for the city and the regiment today.
“It’s important that we remember what happened one hundred years ago at Manchester Hill, and we hope this contemporary yet reflective event will speak to a wider community and help open up the story of the battle and the sacrifices made, even further.”
For more information about The Battle of Manchester Hill and other events to commemorate its centenary, see www.manchester.gov.uk/mcrhill
Manchester Hill Remembered will be a ticketed event, but free of charge.  Tickets for the event are available now at: http://manchesterhill.eventbrite.co.uk/