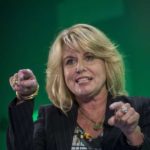 According to a report , Bryant joined Google’s Cloud computing unit in November 2017 as Chief Operating Officer.

“We can confirm that Diane Bryant is no longer with Google. We are grateful for the contributions she made while at Google and we wish her the best in her next pursuit,” a Google spokesperson said in a statement.

When she left Intel, she received a “separation payment” of $4.5 million.

“Under Google Cloud CEO Diane Greene, the search giant has been trying to prove that it has what it takes to sell cloud computing services into the largest businesses,” Business Insider reported.

“Intel is searching for a replacement for Krzanich — and it’s possible that Bryant is under consideration,” it added.