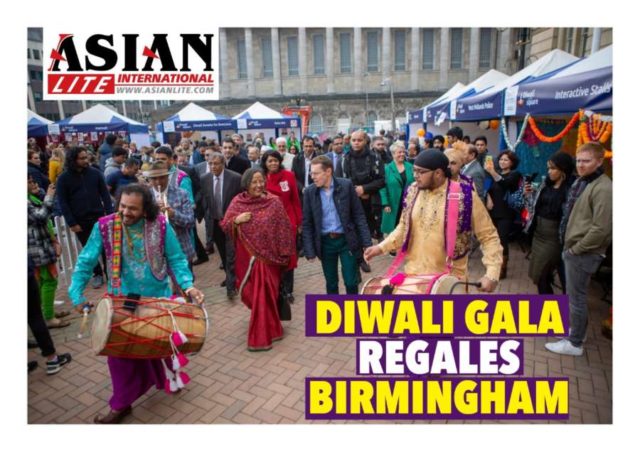 Birmingham witnesses fabulous participation for ‘Diwali On The Square 2019.’ The mega event succeeded in drawing a crowd of more than 20,000 people from all across Midlands and North England. …. Reports Asian Lite News. The High Commissioner together with Mayor of the West Midlands Mr. Andy Street and The Consul General of India, Dr Aman Puri addressed the assembled audience and offered their greetings for the occasion

The West Midlands Combined Authority joined forces with the Consulate General of India in Birmingham to celebrate the third consecutive annual event to usher in the Festival of Light! This landmark event titled “Diwali on the Square” took place in the most prominent and iconic location in Central Birmingham, the Victoria Square.

The mega event succeeded in drawing a crowd of more than 20,000 people from all across Midlands and North England. The enthusiasts thronged the area enjoying live entertainment, delectable food and a plethora of other activities. While a brilliant and sunny day provided a perfect setting for family entertainment, the stage was packed with scintillating performances by professionals and artistes from various community organisations hailing from all parts of Midlands and North England.

The ancient festival of Diwali is traditionally celebrated every autumn by millions of people all over the world. The historical interpretation and mythological folklores of Diwali can vary geographically  – but the festival has always symbolised the universal message of triumph of light over darkness, hope over despair and that of good over evil.

An advance media campaign undertaken by the West Midlands Combined Authority (WMCA) in the run‑up to the event, kindled the curiosity of all. Drawn by the interest generated jointly through WMCA and Consulate General of India, Birmingham’s websites, the social media platforms, posters, leaflets, hoardings on city busy stands, and radio announcements, a bevy of crowd had gathered in the Square on this brilliant Saturday morning, even before the event actually started.

The event kicked off punctually at 1100 hrs in the morning with the pulsating beat of Dhol players, clad in colourful traditional attire who took to the massive stage erected in the famous Victoria Square, in the backdrop of the Birmingham Town Hall and the Council House. While colourful and tastefully decorated stalls flanked the stage on either side showcasing a variety of Indian themes- two large food stalls offering Indian food an savoury items were also points of attraction for the visiting public.

The high point of the day‑long programme was participation by the High Commissioner of India to the UK, H.E. Mrs Ruchi Ghanashyam. The High Commissioner together with Mayor of the West Midlands Mr. Andy Street and The Consul General of India, Dr Aman Puri addressed the assembled audience and offered their greetings for the occasion.

Addressing the huge gathering, the Indian High Commissioner spoke about the rich cultural heritage of India, the cultural linkages between India and the UK, and the tremendous contribution of the Indian Diaspora in strengthening the Indian cultural roots in Britain. The High Commissioner also conveyed Diwali greetings to the gathering and the entire British Indian community of West Midlands and North England, and spoke about the importance of the festival of Diwali in bringing all communities together. She particularly lauded the efforts of the volunteers from the various faith organizations and community groups who came together to prepare and pack 10,000 sweet boxes, a perfect example of community cohesion. The High Commissioner also congratulated the role of Mayor of West Midlands, Mr. Andy Street in co‑hosting the event along with the Consulate General of India for the third consecutive year.

The Mayor of West Midlands, Mr. Andy Street, in his remarks said that though Diwali is celebrated in different ways by different communities but the common theme is triumph of good over evil and light over darkness. Mayor Andy Street congratulated the Consul General Dr. Aman Puri and his team for his initiative in hosting this mega event. He acknowledged the huge efforts of the main sponsors of the event.A beautiful gold embossed memento of Sri Guru Nanak Devji whose 550th Birth Anniversary is being celebrated all over the world this year, was presented to Mayor Andy Street by the High Commissioner. Mayor Andy Street also presented the High Commissioner with an unique souvenir as a token of India-UK friendship brought about by the two country’s cricketing ties.

Consul General, Dr. Aman Puri, conveyed his gratitude to the High Commissioner for gracing the occasion with her presence and also to the Mayor of West Midlands for co-hosting the grand event. He thanked Mayor Andy Street for his support, immense dynamism in connecting West Midlands with India and respecting and valuing all faith communities.

The Consul General thanked all religious and faith organisations who got together, to prepare and distribute Diwali sweets for all guests. He thanked the local firms and institutions viz. HSBC UK, Birmingham Airport, KTC, Ola Cabs, More Catering and Asha’s Birmingham for sponsoring the event. He also thanked the various organisations and acknowledged their efforts in making the event a grand success.

The High Commissioner later visited the various stalls exhibited at the Diwali on the Square. There were a range of interactive stalls devoted to mehndi artists, saree tying and face painting activities etc. There was an array of stalls with sumptuous Indian fast food to enjoy along with the scintillating stage performances which continued non-stop till 5 pm. Visitors were seen queuing up in front of the food stalls to sample the impressive Indian savouries. An impressive ‘Incredible India’ stall was set up by the Consulate in Birmingham with colourful banners, distributing pamphlets, and handouts giving tourism related information. General queries based on the various Consular services provided by the Consulate were dealt with. Information relating to the recent initiative launched by the CGI, Birmingham to keep the Consulate open all 365 days a year for two hours in the morning from 1000 to 1200 hours every day to help Consular Applicants was also disseminated.

A large array of cultural organisations came forward to put up an ensemble of scintillating performances showcasing a wide cross-section of Indian cultural traditions and dance forms. It may be added that the cultural show was meticulously and painstakingly choreographed by Ms. Piali Ray, Director of the prestigious Asian Arts organisation SAMPAD UK so that the entire sequence from morning till evening rolled out in a seamless flow- ably supported by the matchless compering duo Jaya Khazei and Dharmesh Rajput.

One of the items that was keenly watched was the demonstration of authentic Indian yoga by the Yoga Team mentored by the Teacher of Indian Culture from the Consulate General of India, Birmingham.

The star performer Shin Parwana of the famous DCS band and his team put forth a captivating hour long programme, with a multitude of popular songs repeatedly cheered by the crowd which broke into spontaneous dance steps several times during the show.

In a separate function in the evening, a celebration black-tie business dinner was organized by the Consulate General of India along with the office of WMCA at the Birmingham Botanical Gardens, Edgbaston with support from Standard Chartered Bank. The dinner commenced with a networking reception, speeches by High Commissioner of India to the UK, H.E. Mrs Ruchi Ghanashyam, Mayor of the West Midlands Andy Street, The Consul General of India, Dr Aman Puri and Mr. Nash Mithani, Standard Chartered Bank. The High Commissioner Mrs Ruchi Ghanashyam shared her thoughts on the growing ties between India and Midlands. The Mayor of West Midlands Andy Street spoke on the occasion about the initiatives to boost West Midlands – India trade and investment ties. Consul General Dr Aman Puri spoke about the various upcoming projects which the consulate will organise to connect with the British Indian community.The cultural element adding sparkle to the occasion comprised of live performances by the violinist Emily and Shin Parwana from the renowned DCS Band.

The joint effort of the Indian Consulate General in Birmingham and the Mayor of West Midlands’ office was yet another successful annual cultural event of Birmingham.