This year saw the emerging of a UK sensation Britain’s next F1 protégé, EnaamAhmed who is tipped to be bigger and faster than Lewis Hamilton.  Enaam made history by doing the double ie The European and World Champion 2014  in the same year.  Enaam will now start Formula Single Seater career and will be the youngest driver ever to race in the FIA F4 Ford car next year 2015.  From there Enaam will progress to Renault and then Formula 3.

At just 14 years old, this young man is accelerating up ranks with industry leaders touting him as the next Lewis Hamilton.

Enaam has taken the world of motor racing by storm this year, topping leader boards across the world he has dominated the entire season winning the CIK World Championship, CIK European Championship (past champions include Lewis Hamilton, Jenson Button and Max Verstappen), WSK Super Master Series. WSK Champions Cup and Winter Cup. This level of achievement has never been attained by any driver in karting in history; including Lewis Hamilton, Michael Schumacher and Jenson Button.

He now holds the record as the youngest ever driver to win the CIK World Championship (comparatively Lewis won aged 15 years and Michael aged 16 years). During the championships, which were held in France in September, he beat some notable upcoming racing talents including Mick Schumacher, the son of the seven-time F1 world champion, by 6 seconds, securing his title as World Champion of CIK.

His ability to win in any instance has lead the media to describe him as a ‘cannibal’ and now with his sights firmly set on F1 he is aiming for his first professional race in a formula 4 car in 2015 with a view to emulating even eclipsing the success enjoyed by Hamilton and Schumacher. With the future of British racing in his handsEnaam has demonstrated that with hard work and determination anything is possible. 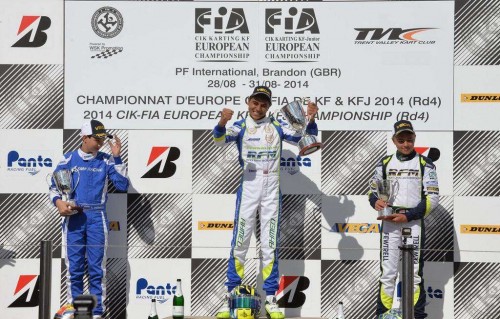