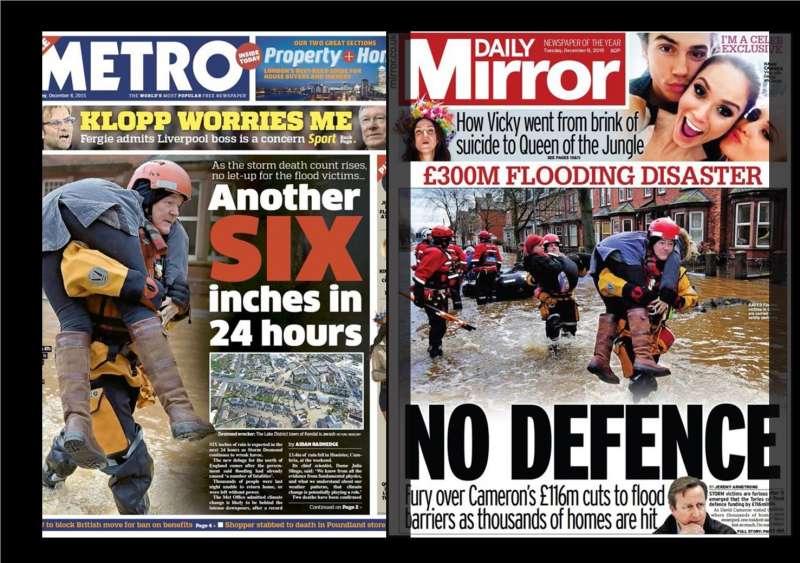 There remains ongoing flooding across Cumbria and parts of Lancashire. Severe flood warnings remain in place for the River Greta at Keswick, River Cocker in Cockermouth and River Eden at Appleby.

Meanwhile, most of the homes left without power have been reconnected, energy firms say. Engineers say power has been restored to all but 1,500 homes in Cumbria and a “handful” in Lancashire. Lancaster University is still without power. Schools remain closed and some hospital procedures have been cancelled.

Storm Desmond battered north-west England, as well as parts of Northern Ireland, north Wales and southern Scotland, over the weekend. Record-breaking amounts of rain fell in Cumbria – the worst-hit county – prompting it to declare a major incident.

Disruption from flooding is expected to continue today along the River Severn, through Shropshire, Worcestershire and Gloucestershire. There is also a flood risk along the River Dee in Cheshire and the River Ouse, in York, over the coming days as it responds to further rainfall.

Environment Agency teams are continuing to check and maintain flood defences, clear blockages in rivers, monitor water levels and work with local flood wardens in the areas worst affected. Pumps and staff have been moved to areas most at risk and staff are now working with partners to help families affected respond to the flooding.

People can be prepared by checking their flood risk and keeping up to date with the latest situation. If travelling, people should not attempt to drive through flood water – 30cm of flowing water is enough to move your car.

Chris Wilding, Environment Agency Flood Risk Manager, said: “Our thoughts are with everyone that has been flooded. Environment Agency teams have been working round the clock, clearing rivers, maintaining flood defences and putting up temporary defences where they are effective.

“We are working closely with the emergency services and partners to make communities aware of the risk of flooding and take urgent action where necessary.

“We urge people not drive through flood water: just 30cm of flowing water is enough to move your car. People should check their flood risk and keep up to date with the latest situation or follow @EnvAgency and #floodaware on Twitter for the latest flood updates.”‎

The Environment Agency said provisional figures from a rain gauge at Honister in the Lake District showed 341mm of rain had fallen in 24 hours over the weekend.

The average rainfall for Cumbria for the month of December is 146.1mm, the Met Office said.