The Metropolitan Police London had made the necessary security arrangements around the High Commission including erecting a sterile zone between the High Commission building and the protestors. The protesters, standing behind the fence on the other side of the road, shouted slogans against India.

The protest was organised to glorify the death of slain terrorist Burhan Wani, who was killed by the Indian security forces on 8 July 2016 in Jammu and Kashmir. Burhan Wani was a well-known commander of Hizbul Mujahideen, an internationally recognised terror entity with a history of causing violence in Jammu and Kashmir. The organisation, which operates from Pakistan, along with its Commander in chief Syed Salahuddin are proscribed terrorist entities including by the European Union and as Specially Designated Global Terrorists (SDGT) declared by the US.

Before he was killed during a counter insurgency operation on July 2016, Burhan Wani and his group carried out multiple attacks in J & K, causing deaths of security personnel and civilians. During 2017-18, he was single handedly responsible for recruitment of innocent Kashmiri youth into Jihadi campaign through religious bigotry and hate. Some of them such as Adil Khandey, Asad Dam Padder, Riaz Naikoo became well known terror operatives, who carried out suicide attacks and killed innocent civilians and security personnel.

“Celebrating a terrorist commander’s death anniversary is a mockery, which exposes those who believe in propagating a selective version of human rights,” said a Londoner who is working at coffee shop in West End, the theatre district. “Instead of supporting the government measures to stem Corona, these people broke the rules to spread the disease in the heart of London.” 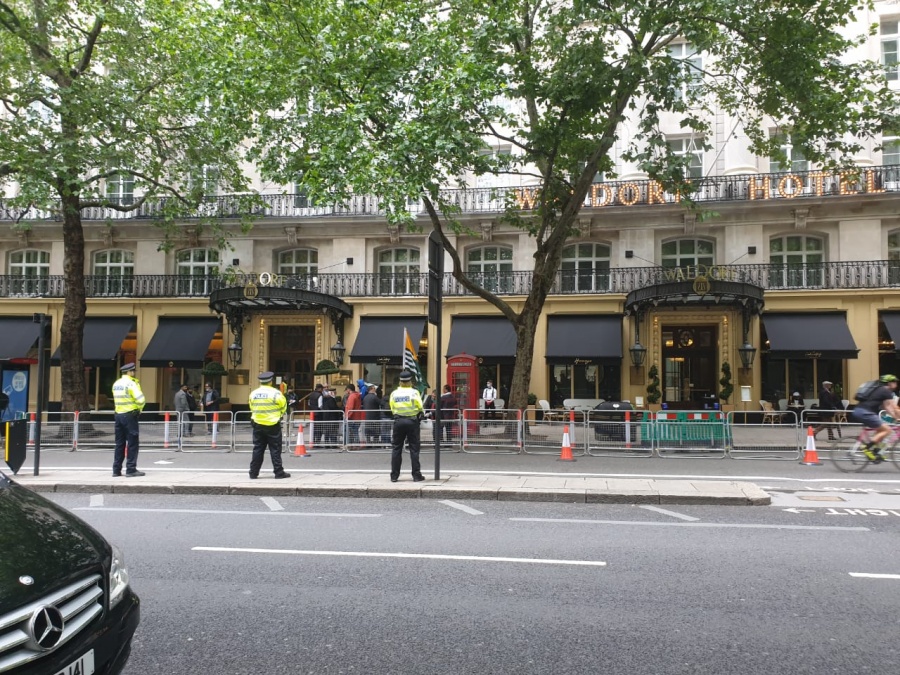 Senior leaders like Lord Nazir Ahmed were not present. The Lord is facing charges of raping a minor boy and a girl at Sheffield Court. The trial is now postponed to January 2021 because of the Covid pandemic.

The Indian officials appreciated the efforts of Metropolitan Police, the Foreign and Commonwealth Office and the Home Office to avoid any ugly scenes near India House. Most of the recent protests were ended in the desecration of the heritage building and unnecessary inconvenience to the people visiting West End, one of the busiest tourist spot in the capital city.

A State Department statement said that in September 2016, Salahuddin had vowed to block any peaceful resolution to the Kashmir conflict, threatened to train more Kashmiri suicide bombers and vowed to turn the Kashmir Valley “into a graveyard for Indian forces”.

“Under Salahuddin’s tenure as senior Hizbul Mujahideen leader, (the group) has claimed responsibility for several attacks including the April 2014 explosives attack in Jammu and Kashmir which injured 17 people,” the statement said.

It said the SDGT action notified the American public and the international community that Syed Salahuddin had committed or posed a significant risk of committing acts of terrorism.

“Designations of terrorist individuals and groups expose and isolate organisations and individuals, and result in denial of access to the US financial system. Moreover, designations can assist or complement the law enforcement actions of other nations,” it said.

“As a consequence of this designation, US persons are generally prohibited from engaging in transactions with Salahuddin and all of Salahuddin’s property and interests in property subject to US jurisdiction are blocked,” it added.