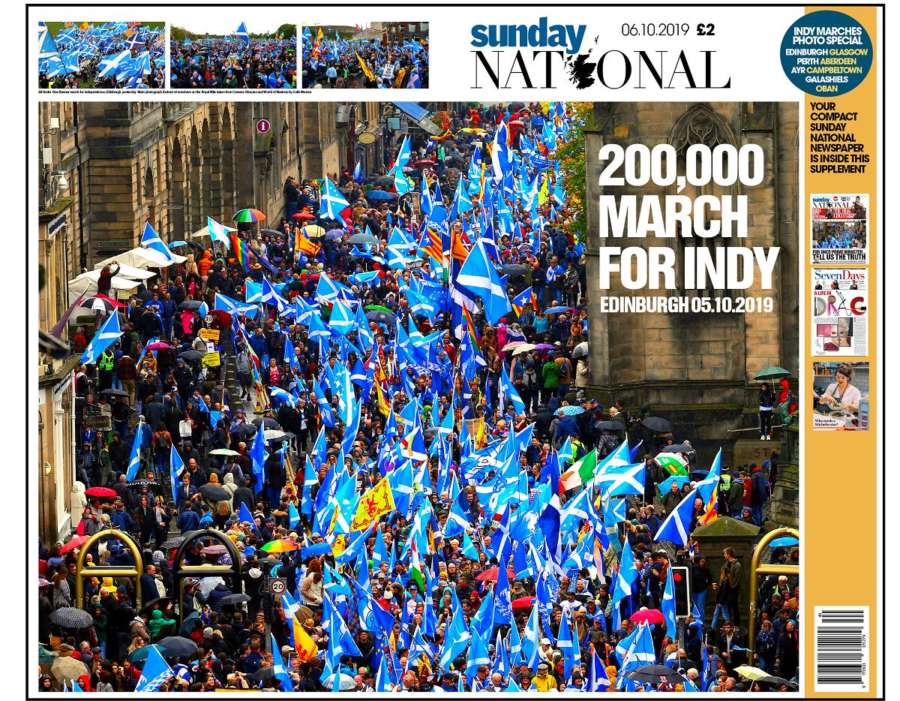 Thousands of supporters took to the streets here demanding Scotland’s independence from the UK. Saturday’s march was the biggest demonstration so far organised by the “All Under One Banner” (AUOB) campaign who have staged similar events in other Scottish towns and cities, Xinhua news agency reported.

The AUOB said that at least 100,000 people attended the march, but some estimates showed that it was double that number.

There was a heavy police presence, but apart from a small counter demonstration, there were no reports of trouble.

Scotland’s First Minister Nicola Sturgeon, who did not attend the rally, sent a message to the organizers saying she was there in spirit.

Sturgeon, who is leader of the Scottish National Party (SNP), said in her message: “Be in no doubt — independence is coming.”

SNP politician Joanna Cherry, who sits in the Scottish Parliament, was one of the main speakers.

Cherry has been one of the key people taking the British government to court in a bid to stop a no-deal Brexit.

Scotland voted to remain in the 2016 Brexit referendum, two years after it voted to stay as part of Britain in a once in a generation independence vote.

But campaigners say they want a second independence referendum in the wake of the handling by the British government of negotiations over its planned departure from the European Union.

But UK Prime Minister Boris Johnson outlined his opposition to the plan at the Conservative party conference, claiming more referendums would cause “total national discord”.

Wow. Just WOW…
What an atmosphere

Does #Brexit spell the end of the "United" Kingdom?