Trump sticks to his guns on barring Muslims from US….writes Arun Kumar from Washington 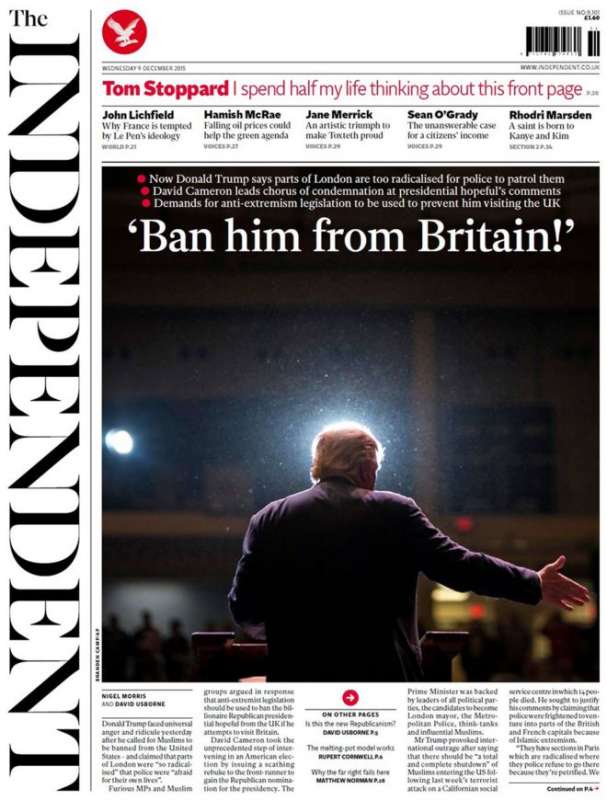 In the face of widespread criticism from across the political spectrum, Republican presidential frontrunner stuck to his guns over his controversial call to bar Muslims from entering the US. With his supporters largely backing him, the real estate mogul and reality TV celebrity projected the call as a temporary move in response to terrorism.

He even invoked President Franklin D. Roosevelt’s authorisation of the detention of Japanese, German and Italian immigrants during World War II as a precedent.

“This is a president highly respected by all; he did the same thing,” Trump told MSNBC Tuesday. The nation was at war in the 1940s, he said, and it is now “at war with radical Islam.”

Defending his proposal in a string of television interviews Tuesday morning, Trump said that fears of terrorism had made policing difficult in places like London and in Paris, the site of the Islamic State attacks on Nov 13 that killed 130 people.

On ABC, Trump clarified that his proposal would not apply to US citizens. “If a person is a Muslim, goes overseas and comes back, they can come back,” he said. “They’re a citizen. That’s different. But we have to figure things out.”

Flaying Trump for his proposal to ban Muslims from entering the country, White House press secretary Josh Earnest said he was not qualified to be president.

“The fact is that what Donald Trump said yesterday disqualifies him from serving as president, and for Republican candidates for president to stand by their pledge to support Trump, that in and of itself is disqualifying,” he said.

Vice President Joseph. Biden told Bloomberg News Tuesday that because of Trump’s “dangerous” comments, if he wins the nomination Hillary Clinton will “win in a walk.”

“Tell Donald Trump: Hate is not an American value,” the former secretary of state wrote on Twitter.

“This is not conservatism,” said Paul Ryan, the House speaker and the Republican vice-presidential nominee in 2012. “What was proposed yesterday is not what this party stands for and, more importantly, it’s not what this country stands for.”

Overall, 32 percent say they support Trump (up 6 points since September), with senator Marco Rubio a distant second place with 14 percent (up 5 points).

The New Hampshire poll comes on the heels of CNN/ORC surveys in Iowa and nationally both showing Trump with growing leads over the rest of the Republican field.