British Foreign Secretary William Hague and Chancellor George Osborne unveil plan for a Gandhi statue at London’s Parliament Square. Other prominent statues in the square are that of Churchill and Mandela 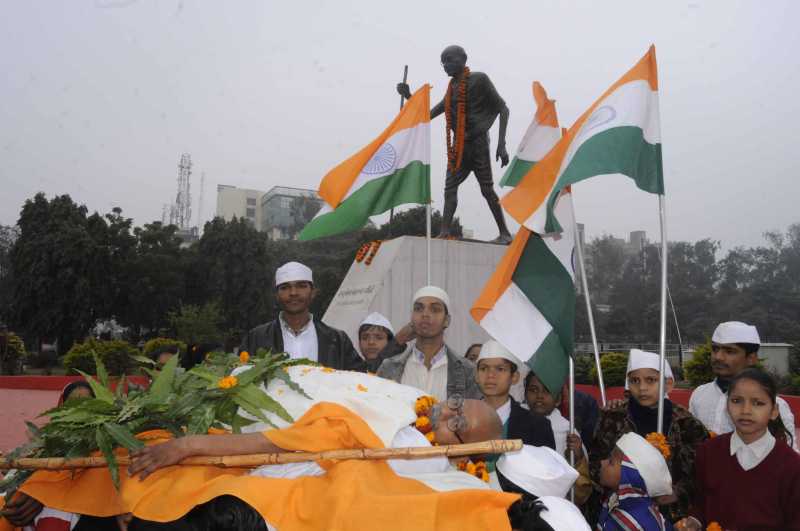 British Foreign Secretary William Hague and Chancellor George Osborne have announced plans for a statue of Mahatma Gandhi, the inspiration for non-violent civil rights movements around the world, to be erected in Parliament Square.

A monument in a location of symbolic value for our democracy is a fitting tribute to this great man, which will inspire us all to uphold his ideals and teachings ahead of important anniversaries of key moments in his extraordinary life. Gandhi has a particular connection to London, having studied here like so many of the talented young Indians we welcome today.

Our ambition is for the monument to be in place early next year. Once installed, the statue will provide a focal point for commemoration next summer of the 100th anniversary of Gandhi’s return to India from South Africa to start the struggle for self-rule, as well as the passing of 70 years since his death in 2018, and the 150th anniversary of his birth in 2019.

The Foreign Secretary and Chancellor made the announcement while visiting Gandhi Smriti, the Gandhimemorial in Delhi, on the second day of their visit to India. The memorial is located on Tees January Marg (30 January Road) at Gandhi’s home and the site of his death on 30 January, 1948.

It is intended that this important monument will be funded by charitable donations and sponsors. The project has the full support of Government, and a special advisory group, led by the UK’s Culture Secretary, Sajid Javid, has been set up to support progress. Philip Jackson, a leading British figurative sculptor, renowned for statues of the Queen Mother and Bomber Command, has been approached to take on this prestigious project.

The memorial will stand alongside those to other international leaders such as Nelson Mandela and Abraham Lincoln.

The Foreign Secretary said: “Gandhi’s view of communal peace and resistance to division, his desire to drive India forward, and his commitment to non-violence left a legacy that is as relevant today as it was during his life. He remains a towering inspiration and a source of strength.  We will honour him with a statue alongside those of other great leaders in Parliament Square.”

The Chancellor said: “As the father of the largest democracy in the world, it’s time for Gandhi to take his place in front of the mother of Parliaments. He is a figure of inspiration, not just in Britain and India, but around the world. New Indian Prime Minister Modi invoked his memory in his inaugural speech to Parliament. I hope this new memorial will be a lasting and fitting tribute to his memory in Britain, and a permanent monument to our friendship with India.”

The Secretary of State for Culture, Media and Sport said: “As Chair of this special advisory group this is a poignant moment for me. My parents were born in British India with first-hand experience of partition. The effect it had on millions of people contributed to my decision to take up public service. “Celebrating Mahatma Gandhi’s reverence and greatness, a man who fought equally for everyone, in the form of a statue in Parliament Square is a fitting tribute. No matter what your background, history, or religion this statue will allow people from around the world to look upon him and appreciate his endeavour and successes for humanity.”