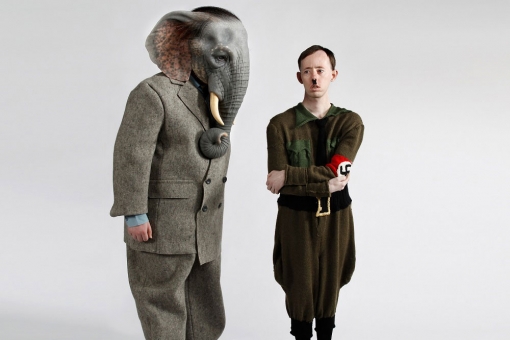 A confrontational piece by the learning-disabled ensemble Back to Back Theatre recounted the Hindu deity’s visit to Hitler’s Germany to reclaim the swastika as a rightful symbol of piece in Edinburgh Festival. 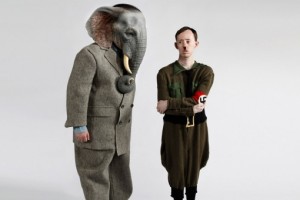 A young man is inspired to create a play about Ganesh, the Hindu god of overcoming obstacles. In his story, the elephant-headed god travels through Nazi Germany to reclaim the swastika, an ancient Hindu symbol. But as the play unfolds the actors themselves begin to feel the weighty responsibility of storytellers, and the director must find the strength to overcome the difficulties in his own life, and defend his play and his collaborators against an overbearing colleague.

Back to Back Theatre creates new forms of contemporary theatre from the perspectives of a unique ensemble of actors, giving voice to social and political issues that speak to everyone.

“The Australian theatre company, which is made up of players with disabilities and recently had a residency in the Victoria and Albert Museum as part of the London International Festival of Theatre, delights in the unpredictable and the confrontational. Underlying Ganesh – indeed much of its self-devised work is the question of how we, as a “normal” audience, see them. Who are the outsiders? Outside what? At one point the play jolts into a direct address to us, the spectators, challenging various levels of involvement, whether sympathetic, embarrassed, patronising – or simply accepting, by this stage easy enough, so all the more disconcerting when Brian the director identifies the audience as the potential enemy, says a review in the Financial Times.

Alongside these challenged actors, guest artist David Woods plays Brian, a non-disabled worker, initially with a wonderfully luvvy-ish line in gush. The shock when he finally snaps at mounting incomprehension and dissent is actually frightening: his charge across the stage to attack a mutinous member of the cast (Scott Price, goaded almost to tears by the director’s bullying) is terrifying. Woods has a wonderful way with mounting exasperation, muttered asides and scathing throwaways. There must be a place for him among stand-ups on the Edinburgh Fringe, says the review.

But the real pleasures come with the Ganesh fable. These scenes are beautifully designed – simple, shadow-play-style backdrops are dragged on and off on transparent curtains; the Swiss alps slip past a moving train, and the night sky twinkles over Berlin – and nicely acted. Brian Tilley is a compelling presence as Ganesh, and Woods isappropriately sinister as Josef Mengele, says Telegraph reviewer Laura Barnett.

The parallel drawn between the elephant-headed Ganesh, and a disabled inmate of a concentration camp – both of whom attract Mengele’s evil fascination – is an interesting one, and might have been developed further, along with the rest of the Ganesh tale. For while the company’s self-reflexiveness – their questions about how they are making theatre, for whom, and why – is all very clever, it ultimately frustrates the progress of a story whose thoughtfulness and beauty offers its own answer to those questions, the reviewer adds.