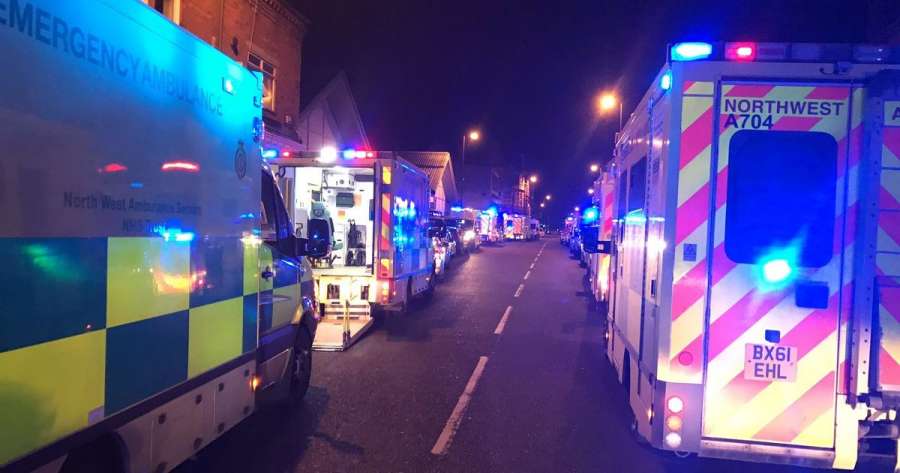 The media reported that more than 30 persons were injured when several houses collapsed in a suspected gas explosion in Britain….reports Asian Lite News

Houses shook and windows were smashed late Saturday night in the blast — described as sounding like an earthquake — which left bricks and debris strewn on roads in Bebington, Wirral county, the BBC reported.

Of a total 34 injured, two are said to be in a serious condition, according to a senior fire service official.

People from a number of houses in the area were evacuated, and more than 100 persons were moved overnight to a nearby church.

A dance studio for children, Complete Works, which was unoccupied at the time, was destroyed.

“It’s what we would describe as a total collapse, or the explosion has blown the walls out, which has caused the roof to collapse,” he said.

“It’s a very significant debris field and [there is] lots of structural damage to the surrounding buildings.”

The seriously injured people were taken to Aintree Hospital in Liverpool. Others, less badly hurt, were treated at the Countess of Chester and Arrowe Park hospitals in Merseyside. One person was taken to the Royal Liverpool Hospital, North West Ambulance Service (NWAS) said.

Ch Insp David Westby, of Merseyside Police, said an investigation was under way.

He said: “We’ve got officers at all the hospitals. Detectives are gathering the relevant information in relation to victims and we will commence the investigation… from this point on.”

Eyewitness Adam Dingwell, 36, described seeing someone lying in the street as he drove through Port Sunlight at the time of the explosion.

“We pulled straight over and tried to establish what had happened. Someone came running from the direction of the noise saying that there had been an explosion and a building had been destroyed.

“When we pulled up we could see….someone was lying in the street”, he said.

The fire service has warned the after effects of the explosion will last for some time.

“This incident is likely to be protracted. This is likely to last several days. There is very significant damage, so it will be some time before people will be allowed back into their homes,” Mr Stephens said