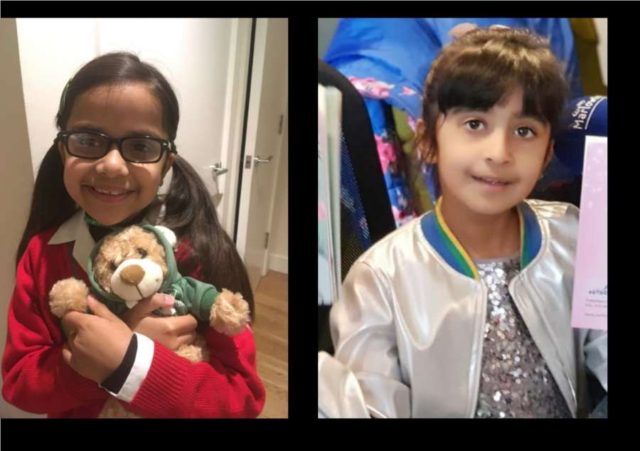 Gia Soni and Divi Mittal are London based school going girls. Extremely talented and creative, both girls have a strong social conscience. Especially in the era of social media, where mobile phones, play stations and tablets rule roost, these girls found time to give their creative pursuits a social direction and support charities.

Gia Soni a bright pupil at Haberdashers’ Aske’s School for Girls is a GRADE YEAR 2 student who believes in dreams and the power of magic. Her first word was ‘Mumma’ and the 2nd ‘Hippopotamus’. She has just turned 7 years old though was 6.5 years when her book Gia’s Stories was published.  On Jan 3, 2019, Gia went live on Marlow FM radio talking to Carla Delaney about the inspiration behind her stories and on Jan 27, 2019 at Double Tree Hilton, Woking she launched her book. There,  she shared the stage with Alan Durant (renowned author) whose 100th Book has just been published.

Gia is a voracious reader and loves to read big books and then tries to fantasise a world that is full of smiles and animals specially horses.  When she grows up she wants to own a stable and have a little reading/writing corner in her office where she continues to write letters to Santa and bake stories of prince, princesses, and lots of animals and her stories always have to have ‘Happy Ever After Endings’ otherwise she immediately starts weaving the one with that.

She loved reading books ever since she was a little baby, says her mother Ekta Soni. Her mother has helped her in typing and fine tuning her stories but the thought process and the basic story lines are her own, Ekta informs.

Through this book, Gia has decided to raise money for her ”favourite charity”- Akshaya Patra- which is a not-for-profit organisation headquartered in Bengaluru, India. Ekta says this organisation strives to eliminate classroom hunger by implementing the Mid-Day Meal Scheme in the government schools and government-aided schools. They serve 1.7 million children a freshly cooked, hot lunch every day in nearly 14000 schools in India across the country. Every purchase on kindle raises money for The Akshayapatra Foundation UK, adds Ekta.

Gia appeals for support to ‘’this noble cause by buying her book!’’

Little Divi Mittal, at 9 years is a student of City of London School for Girls who loves to swim and takes theatre classes with Stagecoach every Saturday doesn’t hesitate to talk on global warming and duties of children towards society.

Divi is inspired to volunteer for and support underprivileged kids who don’t have any libraries or access to books for reading. She is gotten exposed to this volunteering opportunity through her Dad Shailen Mittal who fund raises and actively supports as a volunteer with a team of volunteers from the International Association for Human Values.

At her school Divi carried the bunch of letters received from India and shared them with her school mates and teacher kindling in them the values of service to society.

These feedback letters were sent to the IAHV Read Library educational service project that opens libraries in India and Nepal. Shailen informs that the UK registered charity IAHV has opened 119 libraries across 20 states of India.

Since Divi loves to read and is a huge fan of Harry Potter, she is inspired to volunteer for and support these underprivileged kids who don’t have any libraries or access to general interest books.

Divi’s passion for reading is incredible. She boasts that she has read the entire works of Harry Potter and has lost count of the number of times she has read. ‘’I think its 72 times, I have read all Harry Potter books,’’ she admits.

Apart from the fact that both these girls are London based, school going having a strong social commitment, what is further common among the two is they are both of Indian origin, their parents believe in volunteering for good social causes and they are both inspired by the founder of the Art of Living and International Association of Human Values, Sri Sri Ravi Shankar.