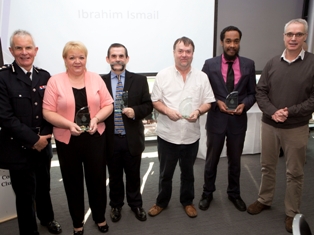 The Gala is an annual event which honours those who give up their free time to offer support for GMP.

There were a total of 10 individual awards presented during the Gala including the Outstanding Leadership, Volunteer of the Year, Community Engagement and Lifetime Achievement awards.

The Lifetime Achievement Award was given to Reg Eaton who has been a member of the GMP Band for 61 years.

As well as the 10 individual awards, there was also a Special Recognition award which was presented to 4 people who play a key role in trying to nurture and strengthen the relationship between GMP and their respective communities.

The recipients of this award were Kieran McMahon from Stockport, May Elfituri and Philip Woolley from Cheetwood and Ibrahim Ismail from Bolton.

A great time was had by everybody in attendance at the Gala which highlighted the excellent support GMP receives from its outstanding volunteers.

Assistant Chief Constable Garry Shewan said: “The Citizens in Policing Gala is an excellent way for us to show the appreciation that Greater Manchester Police has for the people who volunteer their free time to make what we do possible.

“There were a lot of deserving winners and nominees at the Gala, with great stories from their time working alongside GMP.

“The passion and enthusiasm for a better and safer community that all of our volunteers have shines through in the fantastic work they do throughout Greater Manchester.”

Deputy PCC Jim Battle said: “This was a great event to recognise the valuable contribution that citizens are making to our communities by coming forward and volunteering. This is a time to recognise them and thank them for the great work they all do.

“It was an honour to present the Volunteer of the Year Award. People like Colin Spencer, are a true example of the great citizen force we have and the community spirit and passion that runs across Greater Manchester.

“With a powerful citizen force giving their own time and passion, we are able to build strong and safe neighbourhoods.”