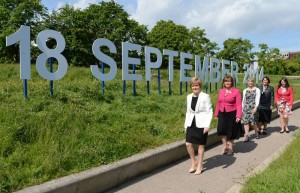 Former British prime minister Gordon Brown, culminating a series of rousing speeches before Scotland decides whether to become independent of the United Kingdom or not, has passionately appealed to fellow Scots to reject separation in Thursday’s referendum.

Targeting an estimated half a million undecided voters, Brown, a lifelong Labour party activist, asked them “to be silent no more” and to “let no narrow nationalism split us asunder”.

“Have confidence, stand up and be counted tomorrow,” he roared on the final day of campaigning Wednesday. “What sort of message would we send out to the rest of the world, we who pioneered a partnership between nations, if tomorrow we said we’re going to give up on sharing, throw our idea of solidarity into the dust,” he asked.

Brown came out of semi-retirement to plunge into campaigning for a “No” vote. Over the past 10 days, he criss-crossed Scotland, galvanising traditional Labour party supporters with barnstorming speeches to try and save the day for Britain.

Three opinion surveys Tuesday night indicated between six percent and 14 percent of the 4.3 million eligible voters were yet to make up their minds. Among those who have decided, the “No” camp is four percentage points ahead in all three polls but the “Yes” side has gained ground.

According to the Financial Times, financial markets analysts said traders were pricing in only a small chance of a “Yes” vote.

“Not a single one of our clients is preparing for a Scottish exit,” said Valentin Marinov, strategist at Citigroup.

The pound was little changed Wednesday, up 0.1 percent at $1.6292 in mid-morning trading.

Alex Salmond, Scottish Nationalist First Minister of Scotland and head of the “Yes” campaign, was confident of success.

“The central mistake that the ‘No’ campaign has made is to tell the people of Scotland that the land of Adam Smith is not capable of running its own matter financially,” he told the BBC.

He dismissed the new powers offered by Westminster political leaders as “the same package that was offered last spring and was repacked in desperation”.

British Prime Minister David Cameron told The Times that while the tightness of the race was keeping him awake at night, he had no regrets over how he had handled the referendum and had been right not to offer a third choice on the ballot paper of further devolution.

One MP belonging to his Conservative party said Cameron would “definitely face a vote of no-confidence” from Tory backbenchers if Scotland voted “Yes” Thursday.

“Our whole campaign has been a shambles,” the MP said.