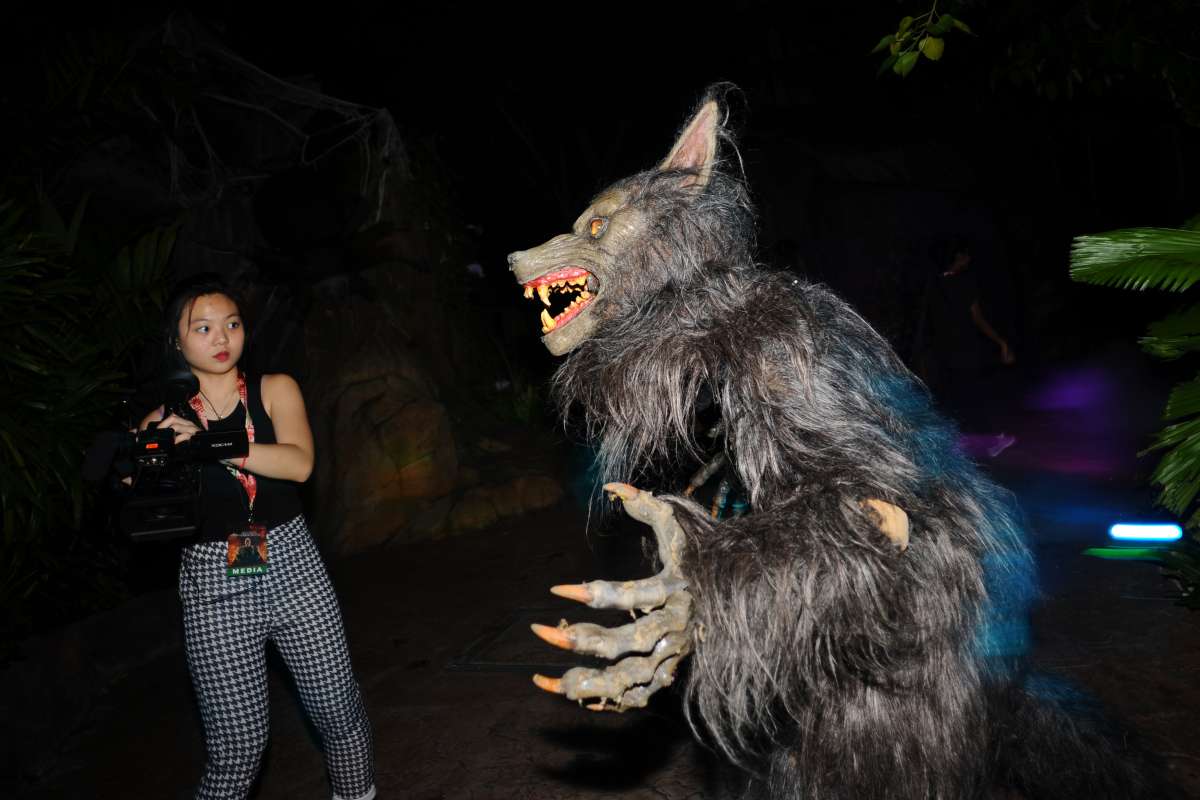 Everyone knows that haunted houses in theme parks are make-believe and fake, but still spectators get excited and frightened.

This year, the Halloween Horror Nights at Universal Studios Singapore returns with brand new concepts and techniques. And Seah Wee Thye, director of entertainment at Resorts World Sentosa, narrated how they have created the scare scenes with delicate designs and quirky ideas, reports Xinhua.

Seah said the design team this year drew inspirations from ghost films and thrillers in Singapore, Japan and Thailand.
“Many ghost films in Japan and Thailand are about stories of girls being killed in schools,” Seah said.
“That’s why we build a school this year called ‘Jing’s Revenge.’ The Asian-style haunted house tells the story of an outcast student called Jing who hanged herself 10 years ago in this school. Visitors will take part either as a witness or as a participant to vicariously experience the whole incident. It is one of the most terrifying haunted houses this year.”
And for local audiences who are more familiar with ghost stories happening in military camps, there’s a “Mati Camp”, which portrays gory scenes that include the torture and slow death of soldiers.
“Males in Singapore are required to join the army and they’re familiar with stories like this,” Seah explained.
Seah said that to build a haunted house needs sophistication and a lot of work. Every single motion and location of the player must be carefully designed and, most of all, they need to create something different from year to year, according to Seah.
During the Horror Night, designers will also follow visitors to observe their reactions.
“We need to take note why there’s no reaction at this corner and do the analysis,” Seah said.
The soul of a haunted house lies not only in layouts but more importantly on the performers. This year, more than 444 scare-actors are engaged for the Halloween Horror Nights, with the oldest being 72 years old. They have been trained for two weeks to prepare for their performances.
Furthermore, to ramp up the fear factors, the team has invited international experts to teach techniques on makeup and costumes over the last four years. This year’s event will see over 5,000 prosthetics pieces produced and 18 gallons of fake blood used every night. And the makeup for Jack’s 3-Dementia, one of the highlights of this year’s programmes, has to be completed in the dark under UV lighting.
“There’re lots of Halloween Horror Nights around the world, and I’m pretty proud that our makeup and costumes are as professional as those in the movies,” Seah said.
Organisers of this year’s Halloween also asked students from local universities to participate. Students joined the show to do some simple makeup for actors, and some are responsible for the spooky sound effects in the horror scenes inside the park.
“It’s fun collaborating with students. They’re passionate towards the show, and the schools are also happy to work with us. And most of all, the students are not afraid to stay up late,” Seah said.
It’s the fourth edition of Halloween Horror Night at Universal Studios Singapore. It features four scare zones and four haunted houses.
For the weak-hearted, they can also enjoy the fun at eight rides, shows and attractions, including Jack’s Nightmare Circus, the first performance show with the character of Jack in this year ‘s event.
While the show is only held from Oct 3 to Nov 1, an event like this takes the whole year to prepare. Seah said that they had started picking up themes since last November and in January, they started to work on details of the settings. When it entered March, they came to contact global contractors for costumes and props.

Seah refused to divulge the exact cost of producing the whole Halloween Horror Nights except saying that they have spent ” millions of (Singapore) dollars” in putting up the show.