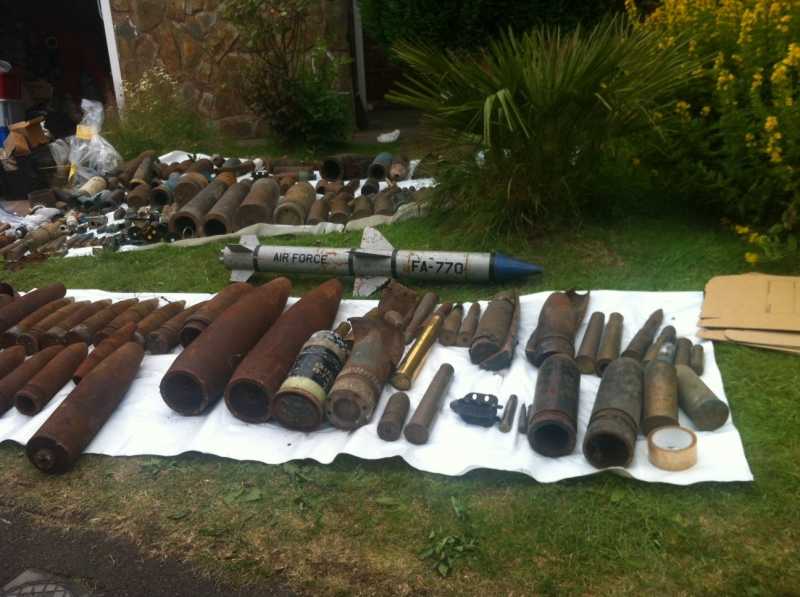 Manchester police have recovered a hoard of firearms, including a missile, at a house in Dukinfield.

As part of an ongoing investigation, a house on Dain Close in Dukinfield was searched on Wednesday. Over 40 prohibited weapons have been seized and are in the process of being examined by specialist officers under the Firearms Act. A 76-year-old man was arrested on suspicion of possessing a prohibited firearm. He has since been bailed pending further enquiries.

Detective Chief Inspector Debbie Dooley said: “We have recovered a significant number of firearms at this address, many of which appear to be antique or heritage weapons relating to the World Wars. “At this stage the weapons do not appear to have been collected for any other reason than as part of a hobby but it does not detract from the seriousness that these weapons pose, particularly if they get into the wrong hands.

“GMP is holding a gun amnesty over the next two weeks and I would urge members of the public to surrender unlawfully held or unwanted guns and ammunition. Give up the gun before we come and search your home.”

Many firearms are held in innocence and ignorance of their illegality or are overlooked and forgotten in people’s homes. The amnesty gives holders the chance to dispose of the firearm or ammunition with no questions asked, by simply taking it to a local police station and handing it in.

The amnesty began on Saturday 12 July at 7am and will run until 11.59pm on Saturday 26 July. Surrendering unwanted, unlicensed weapons avoids the risk of them becoming involved in criminality and means that members of the community can dispose of firearms in a safe place. During that period, those surrendering firearms will not face prosecution for the illegal possession and they can remain anonymous.

During the amnesty there will also be a change in legislation which will make it illegal for certain people to hold weapons such as antique firearms. Weapons and ammunition can be surrendered at any police station but anyone handing in a firearm, ammunition or any other weapon during the amnesty is advised to check the opening times of their station by calling 101.