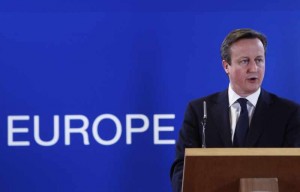 David Cameron’s hopes of reforming Britain’s relationship with Brussels received a boost as the new president of the European Council came out in support of a clampdown on benefit tourism. Donald Tusk said he ‘could not imagine’ the EU without Britain – and it would be a ‘dark scenario’ if we left. He described the EU’s free movement of labour rules as a ‘barrier’ to continued UK membership, insisting it would be possible to ‘reach an agreement’ on change, according to MailOnline report.

‘We can work together to eliminate any welfare abuse by EU migrants,’ he said.

Mr Cameron has pledged a referendum on whether Britain should stay in Europe, held in 2017, after renegotiations with Brussels. Reform of immigration laws to crack down on free movement is a key goal for the Tories, particularly the right of migrants to claim benefits here.  The comments by Mr Tusk, the Polish prime minister, will give Downing Street greater optimism that they will achieve success, says the report.

Mr Cameron hopes Mr Tusk will be able to act as a counterweight to the other powerful EU figure, president of the European Commission Jean-Claude Juncker, who is likely to seek to block reforms. A Downing Street spokesman said: ‘We think it is important that we have got a partner in the presidency of the EU Council who we can work with on reform.’

Mr Tusk said he wanted to ‘emphasise that the EU, and me personally, will take on the concerns voiced by the UK’.

‘I am talking about the UK because I am sure that the future of the EU is not about making it smaller, about contraction. No reasonable person can imagine the EU without the UK. I cannot imagine it myself. I have talked about it with David Cameron.

‘He put forward many proposals for reforms and I am sure with a reasonable framework of politicians we can reach an agreement. We can strive to eliminate various barriers – freedom of movement of workers, for example. We’ll need solutions to the concerns of Great Britain. No one reasonable can envisage the dark scenario of an EU without Britain. Many of the suggestions put forward for EU reform [by Mr Cameron] are sensible. We can work together to eliminate any welfare abuse by EU migrants, he added.

Mr Cameron welcomed the comments, saying: ‘I’m delighted obviously with what Donald Tusk has said about the importance of reform in the EU and addressing the concern that Britain has in the EU. I look forward to working with him in the months and the years ahead.’