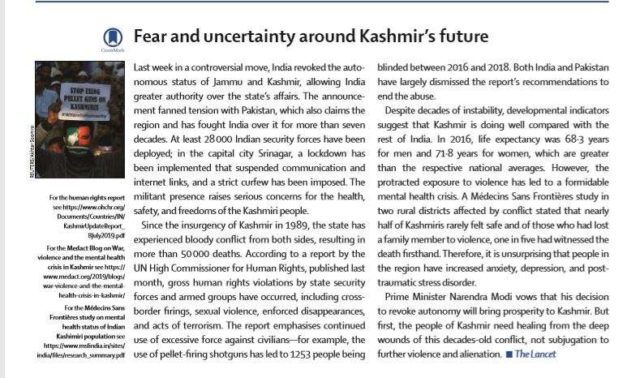 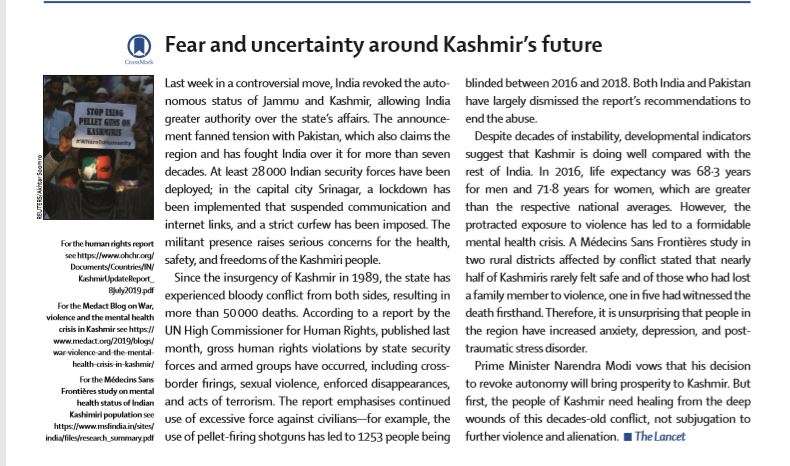 The Indian Medical Association (IMA) has condemned an editorial in The Lancet raising concerns on the “health, safety and freedom of the Kashmiri people” following the the government’s measure to scrap Article 370, terming it “interference” in India’s internal affairs.

Terming the editorial “Fear and Uncertainty around Kashmir’s future” a “breach of propriety” in commenting on a political issue, the IMA’s President Santanu Sen and Secretary General R.V. Ashokan, in a letter to Lancet’s Editor-in-Chief Richard Horton on Monday, questioned the “credibility” and “malafide intention” behind it.

They also said following this “unsolicited intrusion” into Indian affairs, the IMA, on behalf of the country’s medical fraternity, now withdrew “the esteem” they had for the medical journal.

The editorial, terming the Kashmir decision a “controversial move”, noted that it had fanned tension with Pakistan and led to a severe lockdown, which “raises serious concerns for the health, safety, and freedoms of the Kashmiri people”.

It also alleged “gross human rights violations by state security forces and armed groups”, as reported by UN High Commissioner for Human Rights, as well as “excessive force against civilians” as in the “use of pellet-firing shotguns has led to 1253 people being blinded between 2016 and 2018”.

It said that despite positive developmental indicators, the “protracted exposure to violence has led to a formidable mental health crisis”, citing a Medecins Sans Frontieres study.