Foreign Secretary Dominic Raab will travel to Washington on Thursday to meet US counterpart Mike Pompeo. He told BBC that the UK was working with “our European and American friends” to try and “de-escalate and stabilise the situation” …. reports Asian Lite News

British Foreign Secretary Dominic Raab has urged Iran to “take a diplomatic route” to reduce tensions with the West and come in “from the international cold.”

He was appearing in BBC’s Andrew Marr show. The appeal comes amid heightened tensions in the Middle East following the US killing of Iran’s top military leader General Qasem Soleimani.

Meanwhile, the UK’s Royal Navy warships have been ordered to escort British-flagged vessels in the Persian Gulf. Defence Secretary Ben Wallace said on Saturday that the Navy’s HMS Montrose and HMS Defender will accompany UK-flagged ships through the Strait of Hormuz, as they did between July and November following the seizure of a British-flagged tanker by Iran, the BBC reported.

Wallace said that he had spoken to his US counterpart, Mark Esper, on Friday and urged all parties to de-escalate the situation. “Under international law the US is entitled to defend itself against those posing an imminent threat to its citizens,” he added.

Raab, who will travel to Washington on Thursday to meet US counterpart Mike Pompeo, said in a TV interview on Sunday morning that the UK was working with “our European and American friends” to try and “de-escalate and stabilise the situation”.

Raab said he had already spoken with Iraq’s President and Prime minister, and will also “reach out” to Iran’s Foreign Minister Mohammad Javad Zarif. 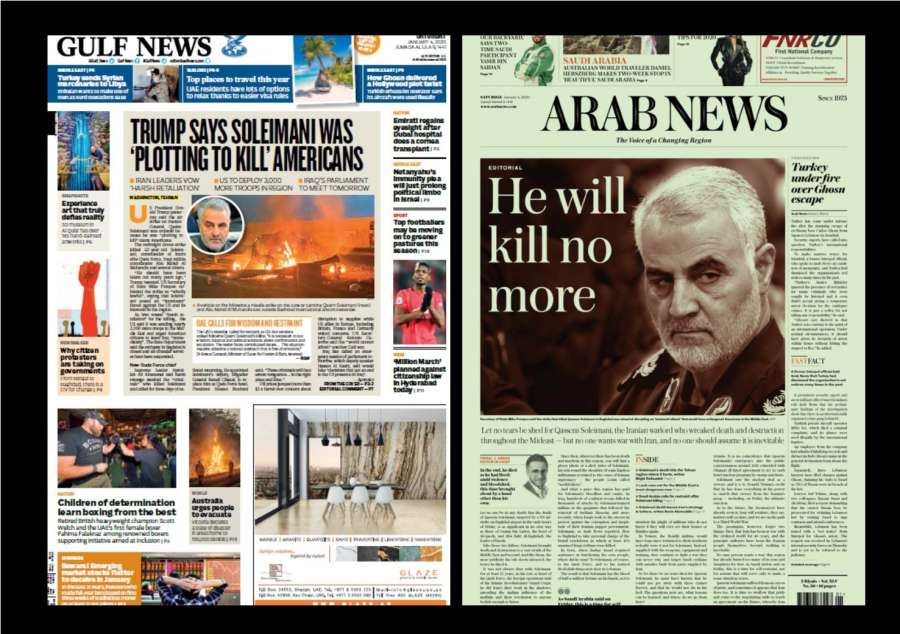 Asked whether the US was right to order the killing of Gen Soleimani, Raab said the UK understands the position Washington was in. “The US will take their own operational judgement call. They have got the right of self-defence,” he added.

Raab is expected to meet his French and German counterparts before travelling to the US capital.

UK Prime Minister Boris Johnson, who is yet to issue a public statement on the January 3 airstrike, will meet foreign leaders this week upon returning to Downing Street after a 12-day Caribbean holiday, the BBC said in the report.

Following the strike, the Foreign Office has hardened its travel advice for Britons in Iraq and Iran. Officials also urged those travelling to the United Arab Emirates, Turkey and Israel to “remain vigilant”.

The Foreign Office also said alerts for other parts of the Middle East were being increased, with calls for citizens to “remain vigilant” in nations including Afghanistan, Israel, Lebanon and Saudi Arabia.

The January 3 airstrike, which was ordered by US President Donald Trump, hit Soleimani’s motorcade near the Baghdad International Airport.

A total of 10 people were killed, including the Iran Major General and Abu Mahdi al-Muhandis, the second-in-command of Iraq’s Popular Mobilization Front (PMF). Iran’s Supreme Leader Ayatollah Ali Khamenei and President Hassan Rouhani have vowed to retaliate against the US over Soleimani’s death.

The airstrike came after Iraqi protesters on December 31 stormed the US embassy compound in Baghdad to protest the American air raids conducted on December 29 against five bases of Iran-backed militias in Iraq and Syria, claiming the lives of 25 people.

The United States President Donald Trump has said that he has identified 52 Iranian targets and will respond “very fast and very hard” to any reprisal from Tehran for the death of Iranian commander Qasem Soleimani, which the US leader ordered.

“Let this serve as a WARNING that if Iran strikes any Americans, or American assets, we have targeted 52 Iranian sites… some at a very high level & important to Iran & the Iranian culture, and those targets, and Iran itself, WILL BE HIT VERY FAST AND VERY HARD,” Trump said via Twitter on Saturday.

“The USA wants no more threats!” added the president, who said the number corresponds to the 52 US diplomats and citizens taken hostage in the storming of the US embassy in Tehran in 1979, after which diplomatic relations between the countries were severed, Efe news reported.

Trump believed that “Iran is talking very boldly about targeting certain USA assets” in response to the death in Baghdad of Soleimani and the vice president of the Iraqi Popular Mobilization Forces, Abu Mahdi al-Muhandis.

On Friday, however, the president said he had ordered the death of Soleimani, commander of the Quds Force of the Islamic Revolutionary Guard Corps considered a hero in the country, in order to “stop a war,” not start one.

The Trump administration has argued that the goal of killing Soleimani was to prevent an “imminent attack” that would have endangered the lives of US forces and diplomats in the Middle East, a region in which 60,000-70,000 US troops are deployed.

Trump again held Soleimani responsible for the death on Dec. 27 of an American contractor in an attack against a military base in Iraq and said the Iranian commander also orchestrated the assault on the US embassy in Baghdad, which occurred in response to US bombings in Syria and Iraq.

Iran has promised “harsh retaliation” and in response, the US was to send 3,000 to 3,500 extra troops to the Middle East, US media reported Saturday. Trump’s decision caused stock market crashes, oil price rises and aroused fear among US allies of armed conflict.

Internally, Democratic opposition lawmakers have condemned Trump for not informing Congress beforehand of the attack.

Meanwhile, protests were held in more than 70 US cities from Los Angeles to New York to protest the killing of Soleimani and the sending of more troops to the Middle East, according to the Act Now to Stop War & End Racism anti-war coalition, who spearheaded the demonstrations with other organisations. Protesters held signs saying “Stop bombing Iraq,” “US troops out of Iraq” and “No war or sanctions on Iran.”