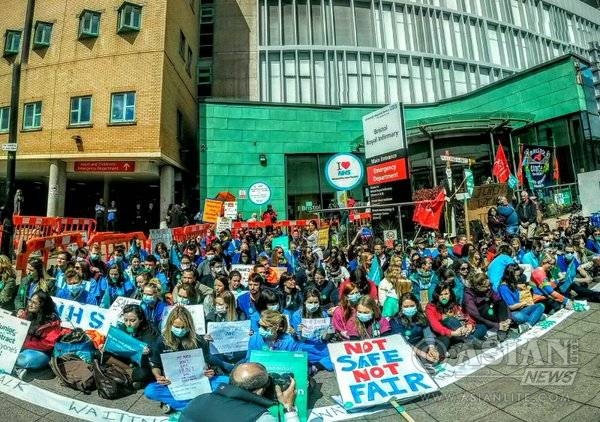 The Junior Doctors Strike revives with a fresh wave. . . . Asian Lite News compiles some of the views and photographs pertaining to these strikes

The junior doctor strike that has been in the news for a long time has begun to affect patients, doctors, emergency cases and the field of medical health on the whole. The support for the demands put forward with this strike has spread to many parts of the UK. The social Media through its very popular Twitter hash tag #JuniorDoctorsStrike has provided a platform for the world to vent out their concerns and support to this movement.

Various leaders have voiced their take on the strike. Here are some of their opinions.

The health Secretary Jeremy Hunt described it as a “very, very bleak day” for the NHS. . . . The reason this has happened is because the government has been unable to negotiate sensibly and reasonably with the BMA.”

NHS England’s Anne Rainsberry said: “Clearly industrial action of this type can put significant pressure on the NHS. We have been working with all hospitals to make sure they have plans in place to provide urgent and emergency care.”

National Voices, a coalition of patient groups and charities, even offered to host talks. Chief executive Jeremy Taylor said: “Patients and the public are caught in the middle – and the harm is being felt by patients and their families.”

BMA junior doctor leader Dr Johann Malawana said “No doctor wants to take any action. They want to be in work, treating patients, but by refusing to get back around the negotiating table the government has left them with no choice but to take short-term action to protect patient care in the long term.”

Here are some glimpses of the strike in various cities.