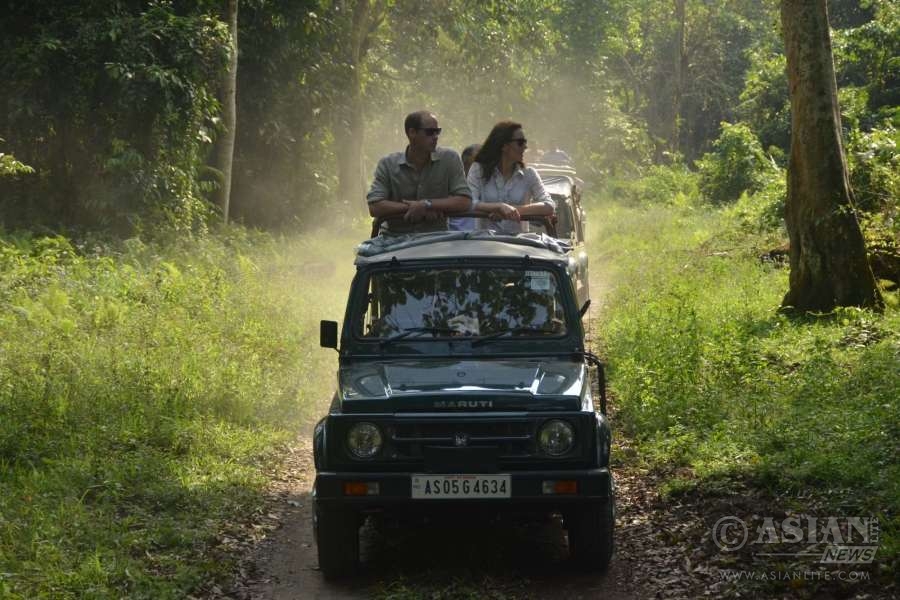 Prince William and Kate Middleton, the Duke and Duchess of Cambridge, toured Assam’s famed Kaziranga National Park on Wednesday and excitedly clicked photographs when they spotted one-horned rhinos, elephants, swamp deer and other wild animals during their two-hour safari.

The British royal couple also interacted with the forest staff who guard the park.

Prince William and his wife, Kate Middleton, entered the Bagori range of the forest in an open Maruti Gypsy around 7.30 a.m. Before hopping on to the Gypsy, the couple were welcomed by the park officials with a gift of traditional Assamese shawls.

Residents of the neighbouring villages had lined up in front of the park entrance since early morning to catch a glimpse of the royal couple.

The park, home to the rare one-horned rhinos, is a Unesco World Heritage site.

Park officials said the couple interacted with the forest staff and tried to understand the problems of the park as well as about the management of the park.

“It was really nice to interact with them. They were thrilled to see all the animals in the park. They also enquired about the rhinos and how we patrol and manage the park,” one of the forest guards, with whom the royal couple interacted, told , declining to be named.

“The couple also watched swamp deer and buffalo, and the princess got excited when she spotted a baby rhino with its mother among a group of rhinos,” said the guard, adding that Kate clicked photographs during the entire safari.

“The prince and princess clicked photographs with us inside the camp. Our officers explained to them about the geography of the park, its flora and fauna, ecology and everything related to the park. They listened to everything very carefully,” said another forest guard.

Park Director M.K. Yadav, however, refused to comment on the visit of the royals.

The couple is also expected to visit the Centre for Wildlife Rehabilitation and Conservation (CWRC) located near the National Park.

They are also likely to travel on Wednesday to the Kaziranga Discovery Centre built by Elephant Family, a charity founded by late Mark Shand, brother of the Duchess of Cornwall Camilla, who is the second wife of Charles, Prince of Wales and father of Prince William.