Columnist Riccha Grrover in an exclusive interview with Mr Navdeep Singh Suri, former  Ambassador of India to the UAE, on his book Khooni Vaisakhi. The lost manuscript of Khooni Vaisakhi by Nanak Singh has been translated for the first time into English by author Nanak Singh’s grandson, Navdeep Suri. It is a Survivor’s account of the Jallianwala Bagh Massacre. 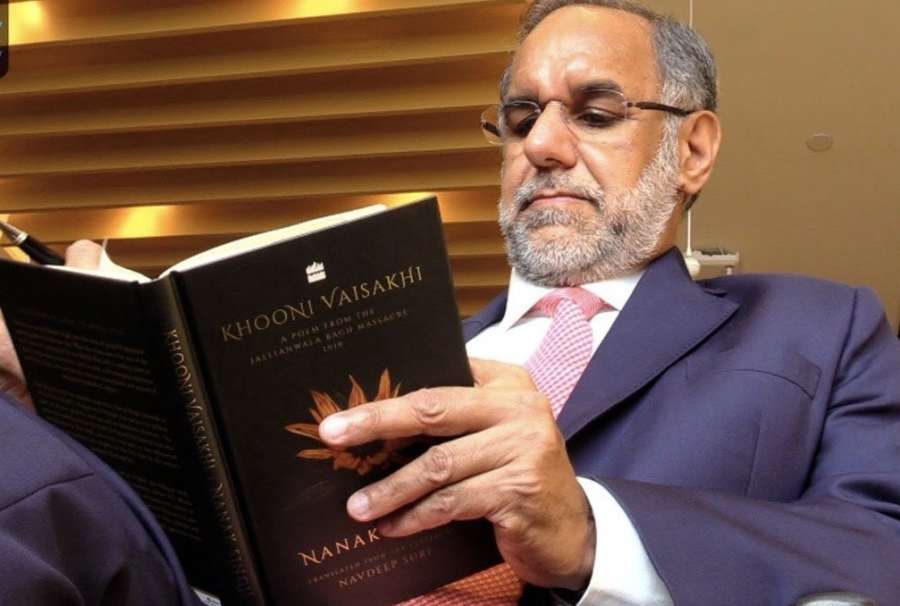 The great Punjabi writer Nanak Singh was present at Jallianwala Bagh on 13 April 1919 and twenty-two years old at the time. As the British troops opened fire on the unarmed gathering protesting against the Rowlatt Act, killing hundreds, Nanak Singh fainted and his unconscious body was piled up among the corpses. After going through the traumatic experience, he proceeded to write Khooni Vaisakhi, a long poem that narrates the political events in the run up to the massacre and its immediate aftermath. The poem was banned soon after its publication in May 1920.

After sixty long years, the poem was rediscovered; it has now been translated into English by the author’s grandson, Navdeep Suri, for the first time and was published in April 2019 to mark the centenary of the Jallianwala Bagh Massacre. Featuring the poem in translation and in original, the bilingual edition is accompanied by essays by Navdeep Suri, H.S. Bhatia and by Justin Rowlatt, whose great-grandfather, Sir Sydney Arthur Taylor Rowlatt, who drafted the Rowlatt Act.

In conversation with Mr Suri…

RG- When and how did you decide to translate the100-year old classic ballad about the Jallianwala Bagh massacre Khooni Vaisakhi and how long did it take you to create this book project?

HE:NS-I was urged to take up the project by my parents in July 2018. It came up during a conversation about the upcoming centenary of the Jallianwala Bagh project and the importance of bringing Khooni Vaisakhi to a wider audience. The project took about eight months in all, covering three overlapping segments – research about Jallianwala Bagh so that I got myself fully acquainted with the context of the poem, getting additional material for the book – including my own essay titled The Book, the Bagh and our Bauji – and the translation of the poem itself. It was during the research phase that I came across the fact that Justin Rowlatt, great grandson of Sir Sidney Rowlatt had served as BBC bureau chief in Delhi and had in fact, visited Jallianwala Bagh. The link was important because the protest meeting in Jallianwala Bagh was largely triggered by the extremely punitive provisions of the Rowlatt Act which Sir Sidney had authored. I was able to contact Justin and am delighted that he readily agreed to contribute an essay for the book. As did Prof. HS Bhatia, a leading scholar on Punjabi literature. 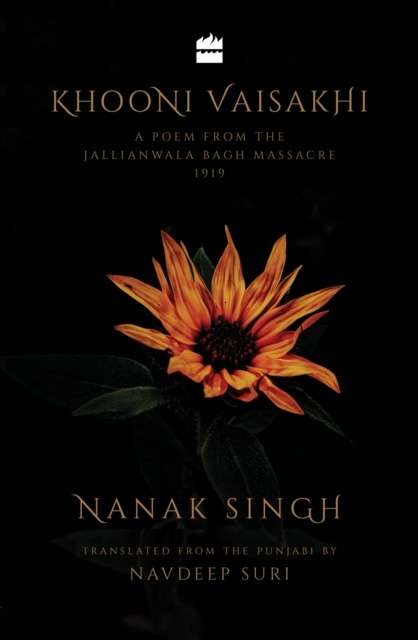 RG-Your grandfather the revolutionary poet and novelist Nanak Singh ji, a Jallianwala Bagh survivor, wrote it after witnessing first-hand the events of April 13, 1919- did he tell you first hand about it while growing up- do you have any childhood memories of this poem?

HE:NS-He actually never spoke about the massacre with us. It was perhaps the trauma of his experience that he simply closed that chapter of his life. So whatever we know of his experience is actually from our grandmother. The book itself is an entirely different story. First published in May 1920, it was soon banned by the British authorities and most copies were confiscated. Although my grandfather refers to the book in his autobiography that was first published in 1949, nobody in our family had actually seen the book until it was rediscovered in 1980 – a full six decades after it was lost. But you will have to read my chapter in the book to learn all the fascinating details of how it was found 60 years later!

RG- Now that the translation is available and so many more people can access the writings and message of the poem through your book what do you think will be its impact on modern day readers with interest in the history of Indian nationalism and the British Raj?

HE:NS-I think that Khooni Vaisakhi is quite unique in the sense that it is both a work of literature and a contemporaneous account of that fateful first fortnight of April 1919 in Amritsar. The poem itself is a searing indictment of the British Raj, presenting the spirit of communal amity that prevailed in Amritsar at the time even as the Raj consciously tried to execute its policy of divide and rule. I think its publication marks an important addition to the body of work that we now have about Jallianwala Bagh and helps us get a better understanding of the mood in Amritsar in the run-up to the massacre, along with a very graphic description of the massacre itself.

RG-In completing this mammoth book project what were the challenges did you face as an author while translating and what is it that kept you motivated and inspired?

HE:NS-The biggest challenge was that I have never translated poetry and felt myself quite inadequate to the challenge when I first embarked on it. I had to read a fair bit about the different styles of translating poetry, about the importance of staying true to the original even as you try to convey the cadence and rhythm in a foreign language. In the end, I am glad that I resisted the temptation to translate into free verse and tried to retain the style of the original.

RG-What’s the reaction been on the book so far by critics and readers? Please share with us about your book launch. Are there are more books of yours in the pipeline?

HE:NS-The reaction has been quite exceptional and has actually come as a very pleasant surprise. Excerpts have been translated into Hindi and published by Hans magazine. A noted Kannada scholar has done the same in his language. A Malayalam edition is in the works, as is one with Urdu or Shahmukhi script that makes it accessible to readers in Pakistan who have a strong interest in this shared chapter of our history. We have had launch events in Delhi, Amritsar, Abu Dhabi and Dubai and the translation as also the musical rendition of some of the poems by singer Harpreet Singh have been very well received. The book is now expected to feature in literature festivals in Jabalpur, Bangaluru, Goa and Jaipur. So I am delighted that its message continues to resonate.

No immediate plans for any other book, though I am tempted to try my hand at Ik Myan Do Talwaran. This is one of my grandfather’s most loved novels, one for which he received the Sahitya Akademi Award in 1962. It is a fictionalised account of the journey of freedom fighter Kartar Singh Sarabha and his participation in the brave but unsuccessful Ghadar movement against the Raj.

RG-Tell us about your previous books and how did your writing journey began? What words of inspiration would you give budding authors?

HE:NS-I have previously translated two other novels of my grandfather Nanak Singh ji. The first was Pavitra Paapi, published by Penguin India as The Watchmaker. The second was Adh Khidya Phul, published by HarperCollins India as A Life Incomplete. Both are set in the undivided Punjab of the 1920s and 30s and provide a wonderful glimpse into society at that point of time.

My advice to budding writers is that in addition to creative writing, you should also consider translating some of the classics from your native languages into English or into other Indian languages. We have an incredibly rich literary heritage and it would be a pity if it remains confined to linguistic borders.

NANAK SINGH (1897-1971) is widely regarded as the father of the Punjabi novel. With little formal education beyond the fourth grade, he wrote an astounding fifty-nine books and received the Sahitya Akademi Award in 1962.