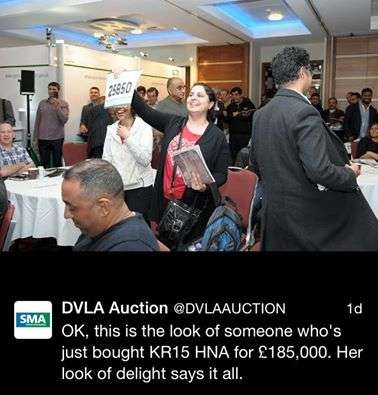 The registration KR15 HNA has set a new British record for the most expensive after being auctioned by the DVLA for a whopping £233,000.

The Driver and Vehicle Licensing agency’s (DVLA) second three-day auction of 2015 held at the Casa Hotel in Chesterfield early this week saw a personalized registration plate, which read “Krishna”, a Hindu deity. It was sold to a London-based businesswoman of Indian origin according to a report by the Metro in the U.K. With the room crammed with buyers, telephone lines full and more people bidding online, the number plate shot up in price from a starting bid of £27,000 reported News minute.

It is the most expensive current style registration to be sold by the DVLA. The previous record was set by MR51 NGH in 2006.

Surprisingly, the report adds that the buyer does not even own a car to put the number plate on. DVLA rules state that plates cannot be put on the car if they make it look newer than it is. Plates with “15” on went on sale in March.

According to a report by cardealer magazine, the total amount of £233000 is arrived at after adding the auctioneer’s commission, 20 per cent VAT and the £80 transfer fee to the winning price of £185000.