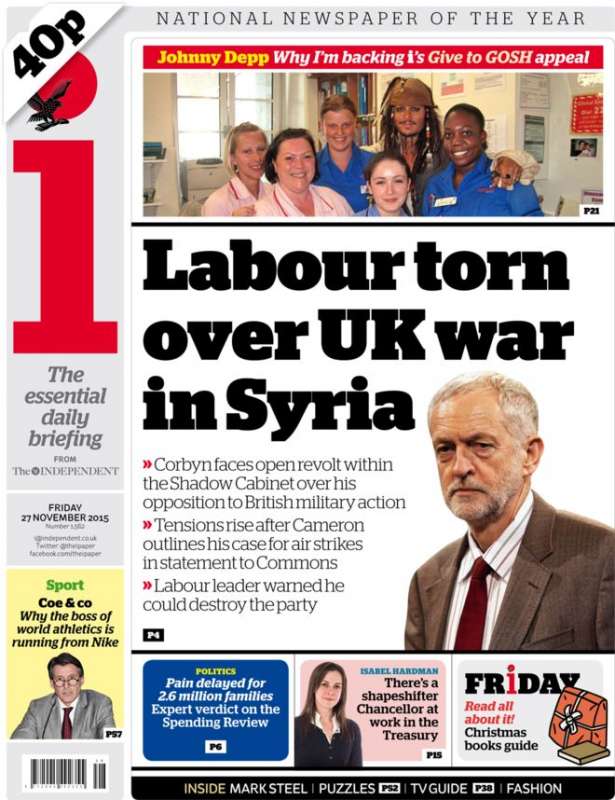 Just four out of 20 shadow cabinet members are now supporting Corbyn. The crisis flared after the Labour leader wrote to his MPs saying he was not convinced by David Cameron’s case for bombing IS targets in Syria. Some shadow ministers felt he was trying to put pressure on them before they had agreed a common position. Shadow Foreign Secretary Hilary Benn, who backs air strikes, told radio 4 that he will not resign over the issue.

Former minister John Spellar said Corbyn should quit despite having only been in office for two months.

Fiona MacTaggart, a Labour former minister, said Corbyn’s position had become “unsustainable” and he should quit.

Some media reports say only three shadow cabinet members are supporting  Corbyn in the Syria stance.

Jeremy Corbyn’s Letter to the MPs below:

“The Prime Minister made a Statement to the House today making the case for a UK bombing campaign against ISIS in Syria. A copy of my response has already been circulated.

“We have all been horrified by the despicable attacks in Paris and are determined to see the defeat of ISIS.

“Our first priority must be the security of Britain and the safety of the British people. The issue now is whether what the Prime Minister is proposing strengthens, or undermines, our national security.

“I do not believe that the Prime Minister today made a convincing case that extending UK bombing to Syria would meet that crucial test. Nor did it satisfactorily answer the questions raised by us and the Foreign Affairs Select Committee.

“In particular, the Prime Minister did not set out a coherent strategy, coordinated through the United Nations, for the defeat of ISIS. Nor has he been able to explain what credible and acceptable ground forces could retake and hold territory freed from ISIS control by an intensified air campaign.

“In my view, the Prime Minister has been unable to explain the contribution of additional UK bombing to a comprehensive negotiated political settlement of the Syrian civil war, or its likely impact on the threat of terrorist attacks in the UK.

“For these and other reasons, I do not believe the Prime Minister’s current proposal for air strikes in Syria will protect our security and therefore cannot support it.

“The Shadow Cabinet met today for an initial discussion and debated the issues extensively. We will meet again on Monday, when we will attempt to reach a common view.

“I will get in touch again when we know the timing of the debate and vote.”