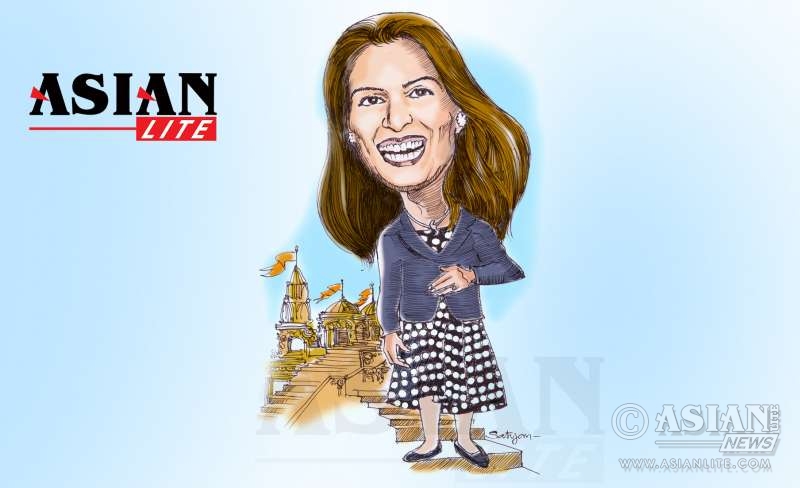 What a fall! Just a few days back, she was sort of in the shoes of Prime Minister Theresa May to welcome guests at No 10 Downing Street to celebrate Diwali. We thought — a Prime Minister in waiting. But she’s gone. Priti Patel’s exit won’t affect Indian influence in Britain….. writes Anasudhin Azeez

It was shocking news for the Indian community in Britain. The most influential British-Indian politician was ousted from the government in an unceremonious way. International Development Secretary Priti Patel was recalled from her Uganda trip and forced to submit her resignation for breaching the ministerial code of conduct.

What a fall! Just a few days back, she was sort of in the shoes of Prime Minister Theresa May to welcome guests at No 10 Downing Street to celebrate Diwali. We thought — a Prime Minister in waiting. A proud moment for the 1.5 million Indian-origin British citizens. We are getting closer and closer to the epicentre of British power. Former Prime Minister David Cameron’s prophecies will become a reality very soon. But that hope was shattered.

Patel, a former Indian diaspora champion and a Pravasi Bharatiya Puraskar awardee, became a victim of her own actions. Surprisingly nobody was there to mourn for her. Neither any party colleagues like MP Alok Sharma or the influential Conservative Friends of India.

Her departure won’t affect India’s influence in the power corridors, because the post-Brexit Britain needs India more than India needs Britain. Patel was hiding behind the Ministerial Code of Ethics when India was humiliated by pro-Pakistani Members of Parliament over the Kashmir issue.

She never supported repeated calls from Indian leaders to relax visa rules for Indian students. Patel even campaigned to tighten the visa rules for foreign chefs at curry houses. That caused the closure of hundreds of restaurants across the country.

She was silent when hundreds of immigrants were racially abused on the streets just after the EU referendum. Who cares about immigrants when they are not part of your constituency? With a majority of 27,000 plus votes, Patel was quite comfortable with her agenda.

She burned all her bridges to fulfil a personal agenda to reach No. 10. India was on the back burner whereas Israel and its powerful lobby with plenty of money at its disposal came on the agenda. Indians are top on the British rich list, but they will think twice to open their cheque book. Some of them are already in trouble over political donations for personal favours.

Without a Godfather or backing from any senior leaders, Patel’s fate was sealed when the first report exposed her unscheduled meeting with Israeli leaders. The first justification from her was that it was a private holiday and some private meetings.

Later the picture was clear. A private summer holiday accompanied by an Israeli lobbyist and 12 meetings with Israeli ministers and top officials. Then came the shocking news. A private meeting with Prime Minister Benjamin Netanyahu.

Poor May. She came to know about the meeting, when the Israeli Prime Minister arrived at No. 10 with an entourage for an official reception. That forced Patel to file an apology.

In the Commons, Foreign Office minister Alistair Burt said that Downing Street regarded the matter “as closed” after Patel was reprimanded by the Prime Minister and reminded of her obligations under the ministerial code. But the report of her another unscheduled meeting with another Israeli minister triggered a major crisis. That put May in trouble.

Patel conducted two meetings in September without the presence of any government officials. One of the meetings was with Israeli Public Security Minister Gilad Erdan in Westminster on September 7. Israelis got what they wanted, but Britain has no clue about what they discussed.

It is thought Lord Polak, honorary President of the Conservative Friends of Israel, was present at both the meetings. That sealed Patel’s fate.

Patel paid the price for not being part of the community despite her ethnic surname or upbringing. The Brexit campaign was the finest example. When most of the Indian community and its leaders were campaigning and supporting Cameron to remain in the EU, she challenged the arguments by aligning with the right-wing media and right-wing politicians.

She was the poster girl of the “Leave” campaign and that undermined the credibility of her mentor Cameron.

Patel was a creation of Cameron. He was promoting her along with Baroness Sayeeda Warsi to woo the Indian and Pakistani voters. Both worked hard to promote the Cameron agenda to reach No. 10. The strategy clicked. When Sayeeda was honoured with a cabinet berth, Patel was assigned to a junior treasury post.

The immigrant voters in Britain are usually loyal to the Labour Party. But Cameron doubled the ethnic vote share within five years in the government. That helped him to retain power in 2015. He was expecting support from the entire A Team, including Patel and Foreign Secretary Boris Johnson in his EU Referendum campaign.

Despite differences, most of the Tory leadership, except jilted leaders like Michael Gove, were pitching for “Remain” in the EU. Patel was the first one to jump ship. There was speculation about Patel at Westminster. But she rejected every allegation calling them “mere speculations”.

Just after the announcement of the Referendum date, Patel was among the first batch of Tories to reach the Leave Campaign headquarters to offer allegiance. Cameron was betrayed. He was planning to anoint Chancellor George Osborne to the prime post in 2020.

To maintain the gender balance and a move to snub Labour for not appointing Harriet Harman as Deputy Prime Minister to Gordon Brown, Patel was earmarked for a senior post — probably the deputy Prime Ministership. But she spoiled that opportunity by leaving the Cameron camp.

After losing the referendum, Cameron left No. 10 to pave the way for May. Patel was promoted to the cabinet as International Development Secretary to handle the 12 billion pound UK aid budget. There are many allegations over the spending of the UK aid. Some part of it will end up in the coffers of corrupt politicians in Asia and Africa.

People were expecting that Patel will use her budget diligently. But she was offering a slice of that to the Israeli Army.

By visiting Golan Heights, she undermined the British stance of neutrality on the Arab-Israeli conflict during the centenary of the Balfour declaration. At just 45, a bright young Indian-origin politician has spoiled her opportunity to get into one of the most powerful positions in the world. What a shame.