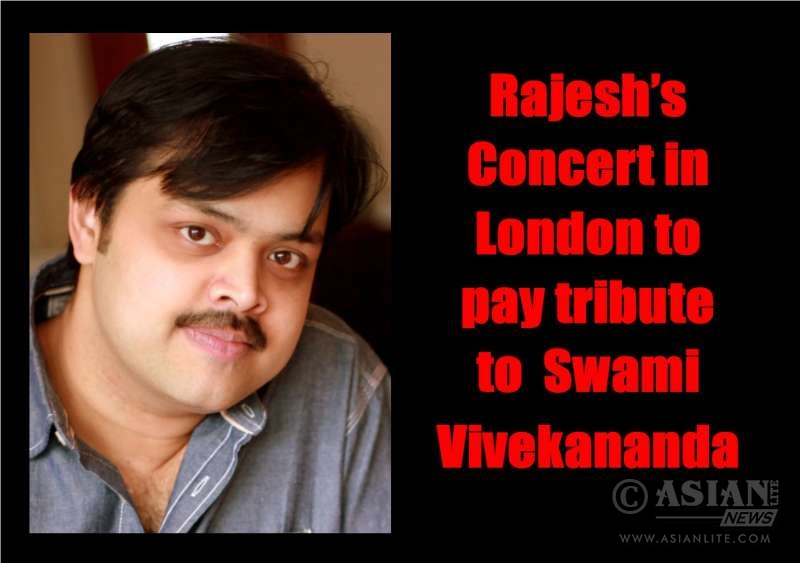 “It is the first time I am conducting a complete classical concert which goes on for about two hours, in the UK, and I am grateful to Hindu Aikyavedi for giving me an opportunity for the same, “said Rajesh Raman who has trained in Carnatic music for over 15 years.

Rajesh has enthralled audiences over the UK, USA and India with almost more than 100 performances with his songs and compositions.

“I have always taken care that I bring improvisations to the music I render,” added Rajesh. Recognitions come easy for this talented singer. He is better known to Malayalee UK audience as the winner of best singer award at Asianet’s Europe’s talent hunt in 2011, which he received from the famous playback singer M.G.Sreekumar.

Rajesh is also familiar as the lead singer of the band `Nisari` which conducts live orchestra across UK, after performing with bands such as `Ragasudharasa.’

“The high point of my musical career was when I had to compose music for the stage performances conducted in UK to honour the poet ONV Kurup, along with the famous music director Albert Vijayan and percussionist Manoj Siva in 2011,” informed Rajesh.  He has also won accolades for the recent composition and rendering of the stage programmes conducted by actor Vineeth in London hosted by Navarasa dance academy under the leadership of dance guru Shiju Menon.

A celebrated singer in Kerala, where he had won the `kalaprathibha’ award in state youth festivals, he is also the founder member of the independent music portal Eenam, which hosted the first online music album by noted singer G. Venugopal.

“I have always taken care that I bring my own improvements and improvisations to the music I render,” added Rajesh.  He is equally well versed in performing in Hindi and Tamil as well as in Malayalam, but his passion remains Carnatic music. “There have been enough opportunities in UK for upbeat film music, but the challenge is to get interested audience for ghazals and melodies and Classical songs. I have not been able to devote more time into this to initiate venues of my own. I am looking forward to explore that this year, and about to release my first commercial Devotional Album later this year,” said Rajesh.

Great to hear that Hindu Aikyavedi is celebrating “Swami Vivekananda Jayanti”. Vivekananda’s speeches at Chicago World’s Parliament of Religions held in Sept 1893 that made him famous as ‘Messenger of Indian wisdom to the Western world’. After the Parliament, he spent nearly three and a half years spreading Vedanta and lived in London and eastern parts of USA. He is an India’s first great cultural ambassador to the West. This event is more exciting; Rajesh Raman’s 2 hours classical concert is going to be a big treat to the ears of Indian classical music lovers in London.…..thanks Rajesh, Hindu Aikyavedi… Read more »

Congratulations Rajesh and God will take you much bigger heights and achievements! Wish you all the very best and success ?