The Loomba Foundation, a UN accredited global NGO working exclusively for the cause of widows and their children, has launched a unique project together with the Punjab Government to empower 5,000 widows in the state. Hon’ble Chief Minister of Punjab, Sardar Parkash Singh Badal, was the Chief Guest at the launch, which was held at the Punjab Agriculture University in Ludhiana. Over 1,000 people participated in the event, including senior ministers, elected representatives, senior bureaucrats, industrialists, media persons, beneficiaries and the general public.

‘The Punjab Project for Empowerment of Widows’ is a unique model which will be a milestone in the history of ‘Private-Public-Partnerships’. Such programmes help empower the widows by making them financially-reliant and enable them to educate their children, support family members and lead a dignified life. The impact of this project is expected to be ten-fold, as each widow will be able educate three children on average, and provide support to about six family members. Therefore, 50,000 people stand to benefit directly or indirectly from this project. 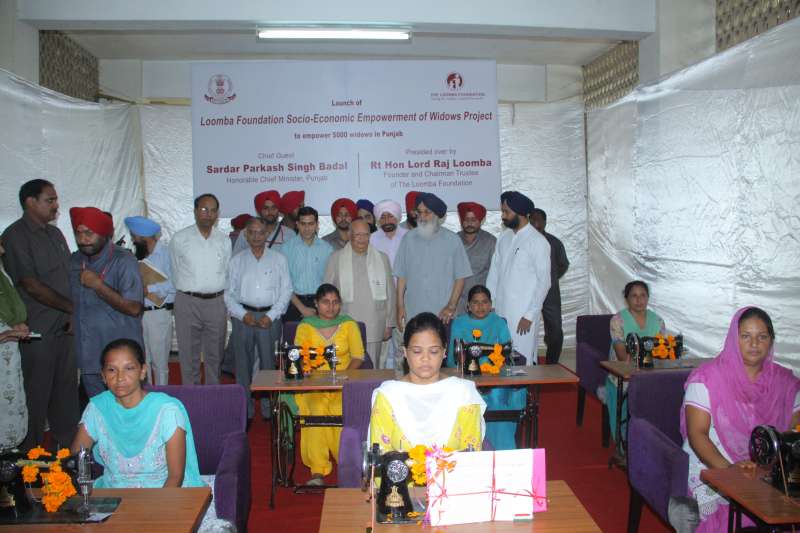 Lord Raj Loomba said, “Having been born in Dhilwan, District Kapurthala and studying at the D.A.V. College in Jallandhar, I have always been connected to the soil of Punjab, no matter where my destiny has taken me. Even though I am a parliamentarian in the UK, and my Foundation works actively to bring widows out of abject poverty in different parts of the world, nothing gives me more joy than to see my own home state joining hands for this worthy cause. Lord Loomba added “We celebrated India’s 68th Independence Day last week, but we are yet to ensure financial independence for millions of our widows. I hope that this partnership with the Punjab Government proves to be just the beginning of a long relationship that aims to completely eradicate the stigma and the hardships associated with widowhood across Punjab and the entire country. I therefore hope that other states in India will also come forward and join hands with The Loomba Foundation to empower widows.”