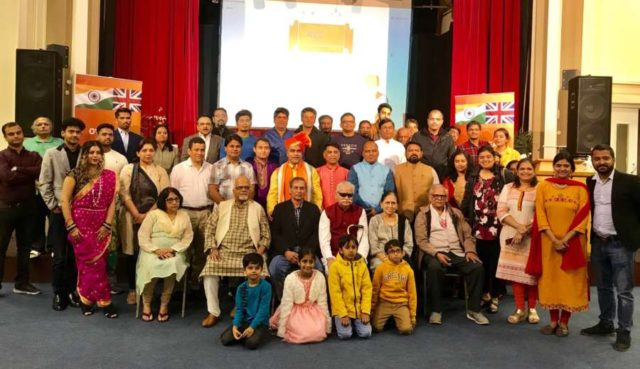 Maharashtra chapter of Overseas Friends of BJP-UK was launched with the presence of several prominent members of the Maharashtrian community in the UK …. Reports Ragasudha Vinjamuri

Taking keen interest and active role in political developments back home is lately the changing phase of Diaspora involvement with India. In line with it, Maharashtra chapter of Overseas Friends of BJP-UK was launched recently that saw a congregation of determined and desirous members of the Maharashtrian community in the UK. The team will be helping with the campaign in Maharashtra for the ensuing elections.

In a ceremony that lasted about three hours, a taster of Marathi culture by way of Gondhal performance by Hardik Vaidya and group, and a Lavani performance by Shivani Jadhav, a solicitor by profession, were showcased, interspersing between speeches and videos.

Dr. Madhukar Ambekar, former President, has outlined its activities and history, including a couple of media encounters he had when there was a misconception of news on India in British media. Tushar Joge and Sushil Rapatwar have presented short term and long term goals of the forum, including how to help Devendra Fadnavis win another term- owing to the excellent work and progress made in Maharashtra under his leadership over previous years.

A video on the formation of Maharashtra state and a historical account of formation of BJP were shown to the attendees. A brainstorming session pertaining to what could be done to strengthen the campaign and to improvise & develop the state was held, and representatives belonging to different regions of Maharashtra were asked to give their inputs. The session ended with the Pasayadan of Sant Dnyaneshwar traditionally.