Ahead of the Pravasi Bharatiya Diwas, the Friends of MP Conclave got of to an overwhelming start, with Manish Tiwari, Managing Director of Here and Now 365 in London, addressing the audience during the inaugural session. He shares his inspirational journey in the multi-cultural Britain to the august audience….reports Asian Lite News

Under the helm of Chief Minister Mr Shivraj Singh Chouhan, the inaugural Friends of Madhya Pradesh conclave aimed to create a forum to reach out to the whole world, by showcasing the opportunities the state presents, and sharing success stories of people from the state.

Representing the UK media landscape was the Managing Director of Here and Now 365 Manish Tiwari, who was one of the panellists sharing his inspirational journey during the first session of the conclave – MP meets MP.

Hundreds of people from around the globe attended the inaugural event. In the wake of Pravasi Bhartiya Divas, the conclave took place on the 3rd and 4th of January in the city of Indore, which is also touted as the cleanest city of India. 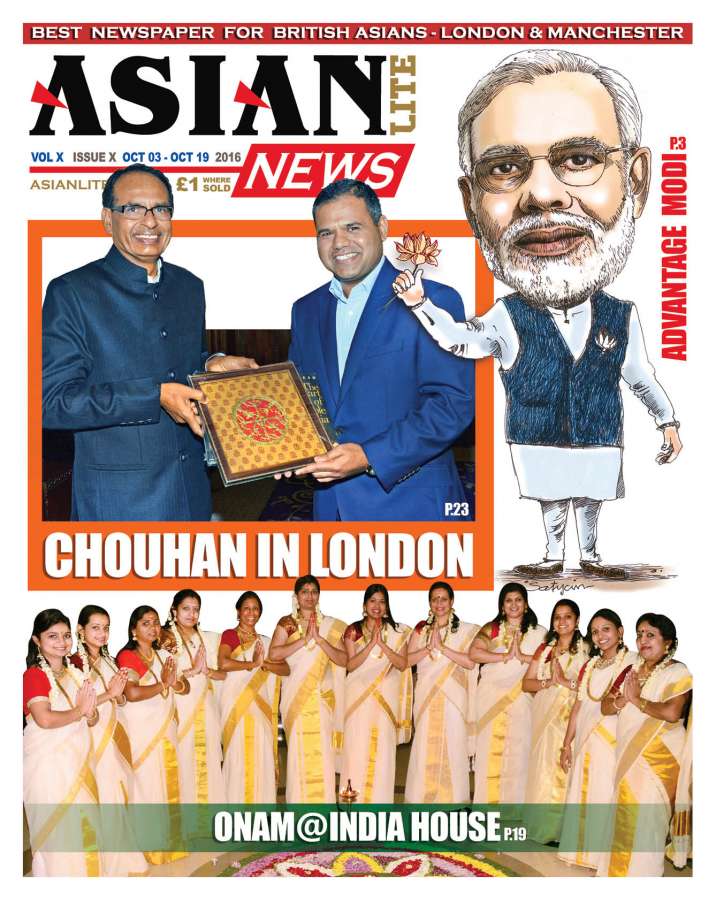 Chief Minister Shivraj Singh Chouhan said that Friends of MP Conclave will increase the prestige of Madhya Pradesh in the world. He said: “Our effort is that people who have come to attend the Friends of MP Conclave, their aspiration to do something for MP fulfils. It will be an open platform for the exchange of ideas for creating a new MP.”

Synonymous with multicultural media in the UK and bridging the gap between the Indian community, brands and the media, Manish spoke about how his journey began with two words – diversity and multiculturalism.

Sharing the inspiration behind his journey, he said: “When I came to England and visited various city centres, one thing that stood out is that every city centre seemed to be a clone of another. I soon came to realise that the modern Western world lags behind when it comes to retaining and respecting diverse cultural nuances, where indigenous cultures and communities have been superseded by a global commercial order (for example the disappearance of gypsy colonies). Brands, media and politicians together have created a monoculture, which has become the norm of the Western world, however, India tells a different story. In India – moving from city to city in itself is a reward – each city is unique, with a different dialect, cuisines, culture.

This celebration of diversity is in itself an immense richness, which unfortunately we do not treasure as we are enamoured by the West. So, when I started my agency in 2005, the premise was cultural diversity – to understand, give a voice to and celebrate different ethnicities and their cultural nuances.”

Met with much applause, Mr Tiwari shared the dais with Anurag Asati (Co-Founder, TheKabadiwala.com), Avani Mishra (Youngest Company Secretary of India), Wajid Khan (Internationally Acclaimed Artist) and Tushar Bharthare (Co-Founder, WiFi India). Another highlight of the session was artist Wajid Khan who mentioned being commissioned by the Queen of England for an exclusive painting. The session was coordinated by Shri VL Kantha Rao, Principal Secretary, MSME, Government of Madhya Pradesh. Also present at the conclave was the Deputy Mayor of London, Business Mr Rajesh Agrawal.

Talking about the conclave Mr Tiwari said: “This is a unique initiative, which will have a far reaching, positive impact for the state. The most endearing part was the spirit of inclusiveness to embrace the whole world and bring people closer to the state.”

The Friends of MP conclave was not just about development, but highlighting the uniqueness of the state – and one such factor was the Department of Happiness – the first of its kind in India, where the state not only focusses on economic development but people’s mental wellbeing.

Conceptualised by Prof Partha Pratim Chakrabarti, Director IIT Kharagpur and Mr Satinder Singh Rekhi, Honorary Chairman of the Reiki Centre, the Department of Happiness was backed by the Chief Minister who got the idea when he visited the Kanha National Park and he realised that people are happier when they are closer to nature.

Highlights of the event included a cultural performance by the band Indian Ocean and the felicitation of the Indian women’s cricket team.