Ministers have seen off challenges to their authority on the first of eight days of scrutiny of a key Brexit bill. The MPs backed plans to repeal the 1972 European Communities Act, which will end the supremacy of EU law in the UK, by 318 votes to 68, BBC reported.

Calls for Scotland, Wales and Northern Ireland to have a veto over the process were rejected by 318 votes to 52.

But several Tories criticised plans to specify an exact date for Brexit and hinted they will rebel at a later date.

The Daily Telegraph reported that up to 15 Conservative MPs could join forces with Labour on the issue when it is voted on next month, threatening defeat for the government.

The MPs, including a number of former cabinet ministers, are angry at a government plan to enshrine in law the Brexit date and time — 11 p.m. on March 29, 2019 — as announced by Prime Minister Theresa May last Friday. 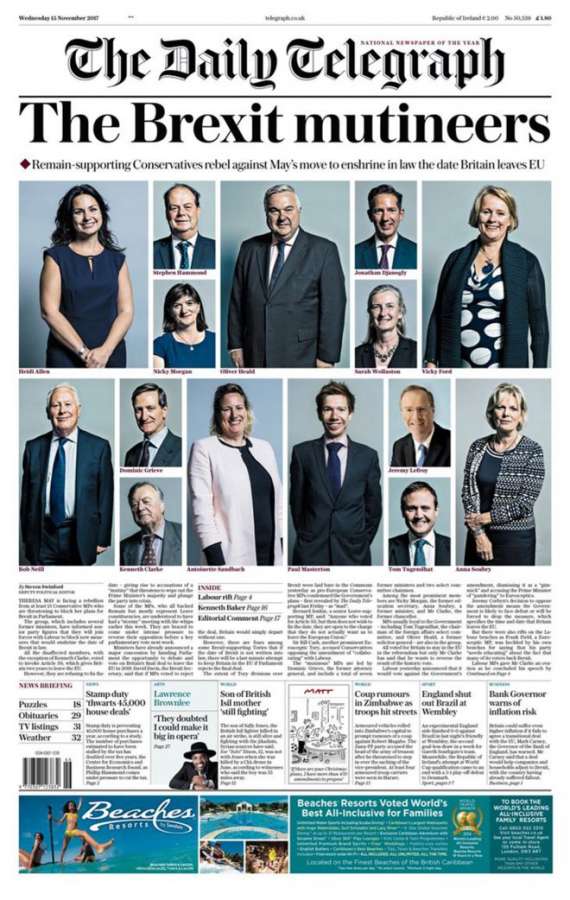 The newspaper described the group of Tories as “Brexit mutineers”, but one of those named – ex-business minister Anna Soubry – told MPs the front page was a “blatant piece of bullying that goes to the very heart of democracy”.

She said she regarded her inclusion as a badge of honour and insisted “none of those people named want to delay or thwart Brexit” but rather sought “a good Brexit that works for everybody in our country”.

He tweeted: “My parliamentary colleagues have sincere suggestions to improve the bill which we are working through and I respect them for that.

Although the issue was not formally debated on Tuesday, it dominated the early skirmishes in the Commons as MPs began considering the EU Withdrawal Bill in depth for the first time.

Former Conservative Attorney General Dominic Grieve said he could not support the “mad” proposal which he said would “fetter” the government’s hands if the negotiations dragged on longer than expected and would prevent any extension to the talks to get a deal in both sides’ interests.

And former Chancellor Kenneth Clarke signalled he would be opposing the government when the matter came to a vote, telling MPs that — as a pro-European — “he was the rebel now” and Eurosceptics in his party now represented the “orthodoxy” within his party.

Under current EU laws, the UK will leave two years to the day after it triggered Article 50, which was on March 29 2017, unless the UK and all 27 other EU members agree to an extension.

Labour said the amendment was therefore a “desperate gimmick” that was “about party management not the national interest”, arguing it increased the chance of the UK crashing out of the bloc without an agreement.