Ardent music lovers in the UK will have an opportunity to listen to Melody Queen Runa Laila, one of the popular singers of South Asia….reports Asian Lite News

Runa Laila will be rendering her golden jubilee concert at City Pavilion in Romford, London on 24th September marking the completion of five decades of her music career, which is being presented by UK Doctorchef. 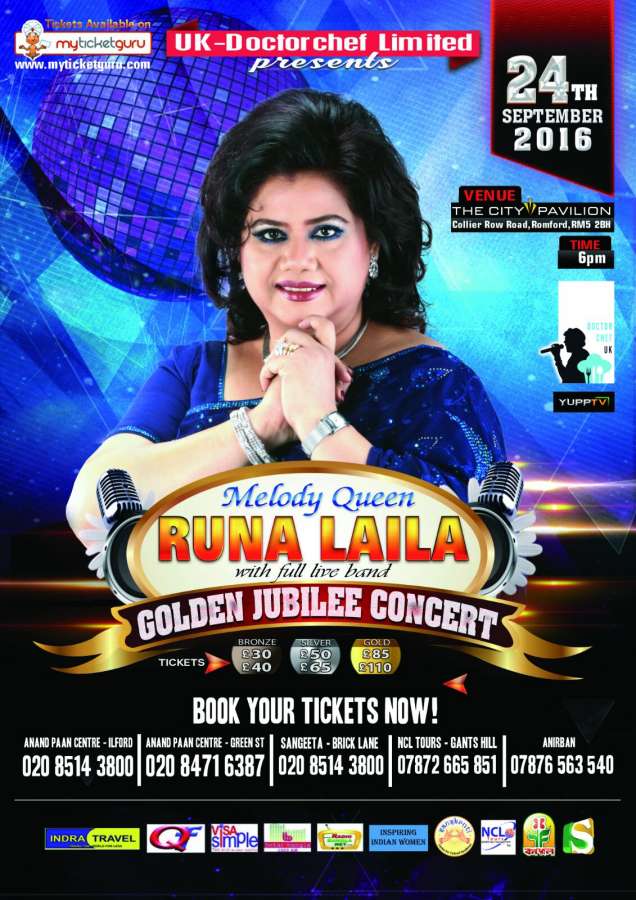 Speaking to Asian Lite, Dr Arpita Ray and Dr Anirban Mandal representing the organisers said: “It is an overwhelming experience to host such a great singer and achiever. Proceeds from this show would go to children’s charity and we are thankful for the support received from the community so far. We are also thankful to sponsors and organisations such as Indra Travels, NCL Tours, Visa Simple, Sanskruti Centre for Cultural Excellence, QF, Bonoful, Pride of Asia, Tabla, Cockney Gaff, Yupp TV, Panna’s, Prestige, ATN Bangla, Betar Bangla, Radio Bangla Net, Nusound Radio and others for the excellent inputs. We are looking forward to a wonderful evening on 24th September”.

Ragasudha Vinjamuri of Sanskruti Centre said: “Fifty years in the industry is an outstanding contribution one could make! I feel great to have lent voice-over to the Star TV campaign of the Golden Jubilee concert of such an iconic singer of South Asia, who once shared a judging panel with most revered Ashaji Bhosle. Hoping her fans would jubilantly celebrate this milestone and enjoy the superhit renditions.”