The speech of US First Lady Michelle Obama at a girls’ school in east London was the talk of the town and the social media buzz with her quotes…. reports Asian Lite News 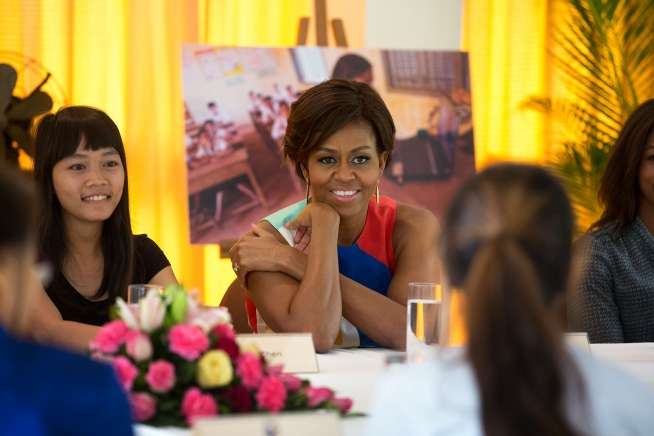 Mrs Obama, wife of President Barack, told pupils at Mulberry School for Girls their “amazing education” gave them all they needed to succeed.

She is being accompanied on her trip by her mother Marian Robinson and two daughters Sasha and Malia.
Mrs Obama told pupils at the school in Tower Hamlets the world needed “more girls like you to lead our parliaments, our courtrooms and universities”.
She said: “With an education from this amazing school you all have everything, everything you need to rise above all of the noise and fulfil every last one of your dreams. And it is so important that you do that, not just for yourselves but for all of us. Because you all have a unique perspective, you have a unique voice to add to the conversation.”
In the speech, Mrs Obama spoke of her own upbringing, saying in her youth there were few black women in positions of power. 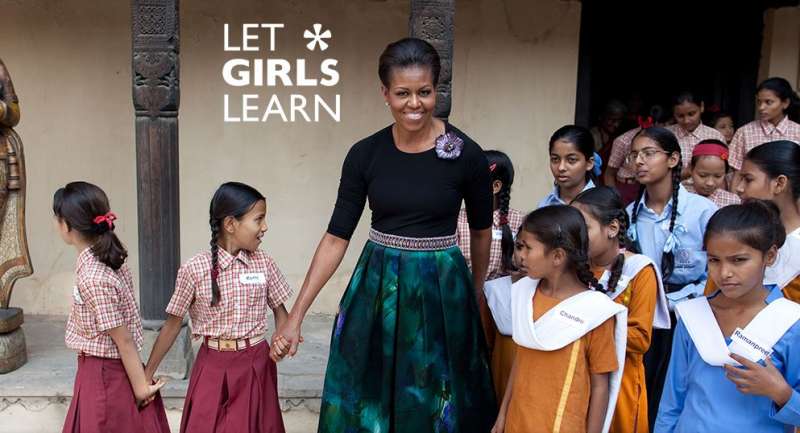 Mrs Obama told the students that she had come from “a working class neighbourhood” on the south side of Chicago and that her parents had told her “that I could do anything… but only if I worked as hard as I could to succeed at school”.
Mrs Obama said she was at the school “because girls like you inspire me”.
“I dreamed one day of going to… the best universities but… there were people who told me that I was setting my sights too high,” she said. “ She said with an education, anything was possible: “With an education… you all have everything you need to rise above all the noise and fulfill every last one of your dreams.”
She added: “It is so important that you do that. Not just for yourselves but for all of us. You have a unique voice to add.”
Mrs Obama told the students “the world needs more girls like you” to lead parliaments and board rooms, and to tackle issues like climate change and extremism.
She added: “People like me and my husband… and so many leaders here in the United Kingdom… are standing with you.”
“I know what’s inside of girls like you and like me. I Know… how much of a difference we can make for those around us.”
Writing in the Financial Times, Mrs Obama cited figures suggesting more than 62 million girls were out of school across the world, which she described as “a heartbreaking injustice”.
Girls faced obstacles to education such as forced marriages, early pregnancies, abuse and sexism, she said.
“That kind of life is unthinkable for the girls in our lives, so why would we accept this fate for any girl on this planet?” she wrote.
“This week I will join Prime Minister David Cameron in London to begin to answer that question, and announce a series of partnerships between the US and UK to educate adolescent girls in developing countries around the world.”