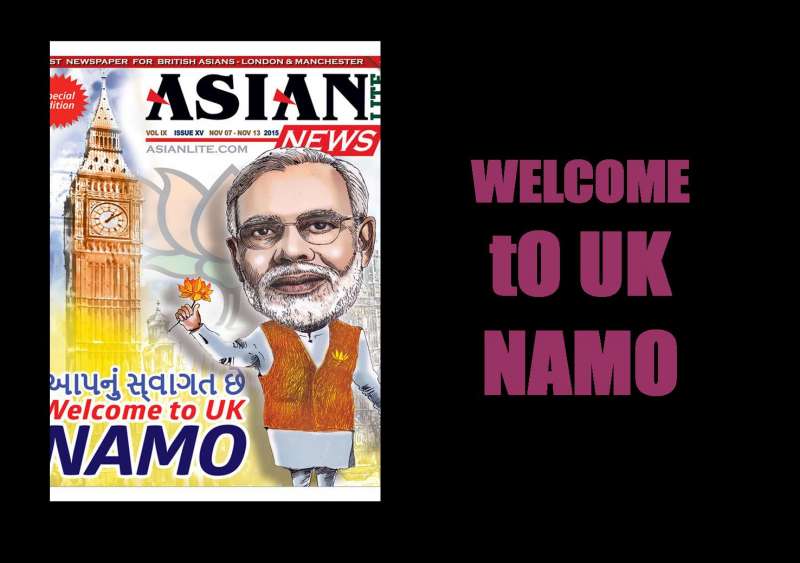 The Europe India Forum (EIF) said it will be hosting a reception in honour of Prime Minister Modi at Wembley Stadium on 13 November.

Over 70,000 people are expected to attend this special invitation only “Olympic style” event. It will be the largest reception any foreign head of government has ever received in the UK.

It will also be the largest an Indian prime minister has ever received anywhere outside India. The Reception themed “Two Great Nations. One Glorious Future.” will kick off with a specially produced cultural show featuring some of the very best British Indian artists.

Prime Minister Modi’s keynote address will be followed by what is expected to be the country’s largest fireworks display, as the visit coincides with the festival of Diwali. Members of Parliament from across the political spectrum, business leaders, and personalities from the world of entertainment, art and culture are also expected to attend.

The event website www.ukwelcomesmodi.org will go live tomorrow at 10.00 hrs UK time for UK community organisations to register their interest in becoming Welcome Partners. The event Twitter handle is @ukwelcomesmodi and will be used for all announcements and information relating to the event and its build-up.

Professor Nath Puri CBE, a founding member of EIF, said: “Prime Minister Modi has emerged as a iconic figure on the world stage. This Olympics style reception he will receive at Wembley stadium will not only reflect the respect and adulation he has within the British Indian community, but will highlight and celebrate his vision for a peaceful and prosperous India. It will bring together people from all communities and backgrounds in a mood of celebration of all that unites us as countries and people.”

In welcoming the announcement, Priti Patel MP, UK Minister for Employment and Prime Minister Cameron’s Indian Diaspora Champion said: “The UK Government places huge importance on the special relationship with India. Prime Minister Modi’s forthcoming visit and the community reception will only serve to strengthen the bond of friendship between our two great nations. I encourage as many community organisations to register their support.”

Virendra Sharma MP, chairman of the All Party Parliamentary Group on India-UK Relations said “The UK’s 1.5 million India diaspora are an excellent bridge between the UK and India. Prime Minister Modi has the largest democratic mandate in the history of the world. As a person of Indian origin, I am hugely looking forward to this defining moment where we can celebrate our democracies and shared values.”

Shamsuddin Agha, President of the Indian Muslim Federation said, “I am delighted that Shri Narendra Modi, our Prime Minister, will be visiting the UK shortly. I have no doubt that it will strengthen the ties between our great nations. It will bring people closer than ever before. It will bolster trade and economic cooperation.

Gurmail Singh Mahli, President of Sri Guru Singh Sabha Southall, the largest Sikh Gurdwara in the UK said “Prime Minister Modi’s farsighted leadership is worthy of praise and deserves recognition.  Success in our home state of Punjab will share and contribute further in the success of India and we all support the visionary direction of Prime Minsiter Modi.”

Yajur Shah, President of National Hindu Students’ Forum UK said “Prime Minister Modi is an inspiration to young people around the world.  His tech savvy approach to dealing with some of the most complex problem’s demonstrates that he is a leader for the modern generation.  We will be giving him a warm and vibrant welcome to the UK.”

Lord Khalid Hameed, board member of the British Muslim Research Centre and chief executive of London International Hospital said: “We have heard of the splendid news of the forthcoming visit of the Indian Prime Minister Modi. It will enhance and increase the goodwill between Great Britain and India, and encourage, with great delight Indians living in the UK.”

Ranjit Singh Baxi, President of the World Punjabi Organisation said “Prime Minister Modi’s forthcoming visit to the UK will be celebrated as the beginning of a new phase in the strengthening of the Indo-British partnership and the enhancing of bilateral investments. The World Punjabi Organisation and all Indians across UK are looking forward to welcoming Shri Narendra Modi. Working together under his dynamic leadership we will make India a global manufacturing hub – Make in India.”

Lord Bilimoria, a cross bench peer of Zoroastrian Indian descent and founding chairman of the UK India Business Council said “The UK and India have an opportunity to really invigorate this unique and deep bilateral relationship.  Prime Minister Modi visit I am sure be the catalyst for many great things.”