Saudi Arabia’s Commission for the Promotion of Virtue and Prevention of Vice, the religious police, has launched an investigation into a physical assault by some of its members on a British national who was with his Saudi wife in the capital Riyadh. 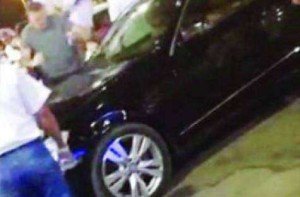 The investigation was ordered by the Commission president Shaikh Abdul Lateef Bin Abdul Aziz Al Shaikh after a short video clip went viral on social networks showing a Commission member pouncing on the Briton in front of a mall in Riyadh, according to Gulf News.

In the nine-second clip, the British man, identified by pan-Arab daily Al Hayat as Peter Haworth, could be heard shouting “This is my wife.”

According to reports, members of the Commission followed the couple inside a supermarket and when the man used a check-out lane “reserved for women and families”, they wanted to know the reasons for using a counter with female cashiers. He reportedly responded that he was with his wife.

However, the members followed the couple outside and took pictures of the Briton and his car. He responded by taking pictures of the Commission members and their car. They reportedly became more upset and demanded that he hand over his camera, but he refused, the report said.

“In the ensuing altercation, a bearded man, reportedly a member of the Commission, pounced on the Briton, who fell to the ground and shouted back that the woman with him was his wife. Freeing themselves from the physical assault, the couple jumped into their car and locked the doors, prompting Commission members to pound on the windows and to ask them to get out.

“The couple refused and called the police to rescue them. However, when the policemen arrived and saw that members of the Commission were involved, they drove off, reports said. The British embassy was contacted and it dispatched a mission car that took the couple to their home. The Briton was later contacted by the police and an investigation into the incident was launched.

“An anonymous source told Al Hayat newspaper that Haworth will meet Riyadh governor Prince Turki Bin Abdullah and the religious police Chief. Abdul Latif Al Shaikh. Al Shaikh, in ordering the probe by the Commission, said that there would be zero tolerance towards anyone guilty of abusing authority or misbehaving, ” it added.