An Eternal Saga of Love and Revenge: Naagin will go on-air starting 1st November, 2015, every Saturday-Sunday at 7:00 PM on COLORS….reports Asian Lite News 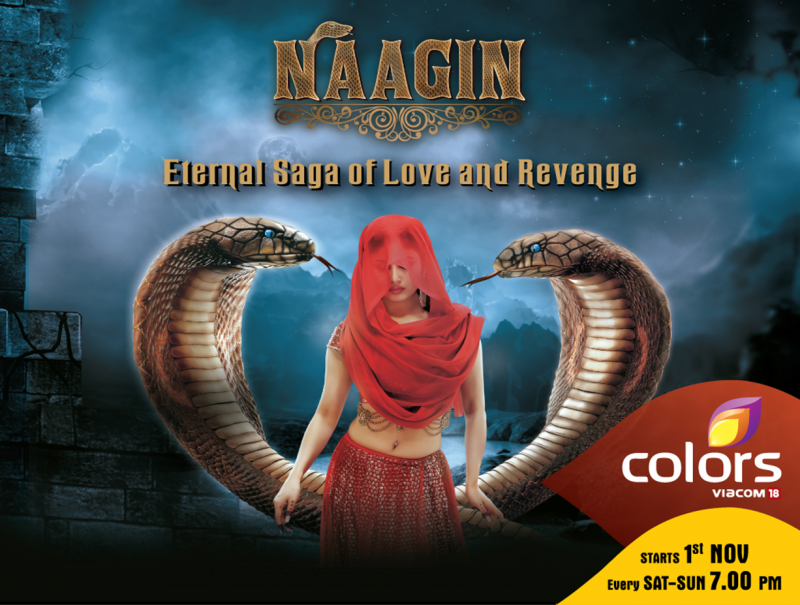 A finite series from Ekta Kapoor’s Balaji Telefilms, Naagin will bring alive the folklore of Icchadhari Naagin on COLORS. The purity of love has the ability to outshine the gleam of cruelty and revenge. But when revenge is the sole driving force, how far is one willing to go?

This will come to the fore in COLORS’ all-new mystical thriller, Naagin a dramatically obsessive love story of reincarnation leafing through various layers of buried sentiments. Bringing together a stellar cast including actors Arjun Bijlani, Mouni Roy, Adaa Khan and Sudha Chandran, Naagin highlights a miraculous shape-shifting snake having the power to become a human; she can be anybody she wants – a wife, a seductress, a mistress, a damsel in distress – all in the name of revenge. The show will emphasize on the conflicting emotions of heartless revenge and blazing love. The first-of-its-kind weekend fiction finite series from Balaji Telefilms, Naagin will premiere on 1st November, 2015 and will air every Saturday and Sunday at 7:00 PM on COLORS.

Set against the backdrop of mystic Rajasthan, Naagin promises to be a visual treat for viewers with outstanding VFX effects offering an authentic film-like experience. The musical score of the show will add to the viewing experience as COLORS recreates the timeless magic of the song ‘Tere Sang Pyaar Main Nahi Todna’ through a new-age adaptation. The gripping plot, theatrical characterization and intense performances make Naagin an edge-of-seat thriller creating a sense of excitement as viewers anticipate what new twist and revelation will change equations among the characters at every stage.

Speaking about the new fiction offering, Manisha Sharma, Programming Head – COLORS said: “After the success of 24 Season 1, Naagin is our second offering within the fiction finite series space airing on weekends. Naagin is a mystical thriller incorporating a dramatic twist at every corner to add an element of thrill and excitement which will keep viewers engaged. The show is a testimony of Ekta Kapoor and Balaji Telefilms’ conviction towards providing quality entertainment avenues for viewers through new and innovative concepts that appeal to viewers visually and in terms of its narrative.”

Commenting on the show’s format, Ekta Kapoor of Balaji Telefilms said: “At Balaji, we have always believed in experimenting with different concepts while bringing in some variety for our viewers. The concept of Naagin is something that we, at Balaji, have never explored in the past; it is a completely new facet of love stories that transcends into the mystique of the unknown. With intense focus on different elements like characterization, scripting, visual appeal, etc, we have amped up the production value to make it a winning proposition on the small screen. Putting together an hour-long proposition requires additional investment in terms of story development and high-end technology, and we are looking forward to presenting an all-round offering to COLORS’ viewers.”

An aesthetically narrated saga, Naagin delves into the life of a suave and ambitious business tycoon, Ritik Raheja (Arjun Bijlani) believed that love and religion are distractions as they make you weak. But his beliefs are challenged when he comes face-to-face with Shivanya (Mouni Roy). While Ritik is enamoured by her simplicity, Shivanya is stuck between two extreme emotions – love and vengeance. Shivanya’s friend, Sesa (Adaa Khan) is her support system, but she has an ulterior motive that no one knows about. The constant conflict between love and revenge drive these protagonists together as their lives clash in a coming together of their past histories.

Commenting about her role as Shivanya aka Mouni Roy said: “Having tried my hand at mythology, family dramas and reality shows, I was keen to explore a brand-new genre which would challenge my sensibilities as an actor. Essaying Shivanya in Naagin satiates that need to do something that stands out because the different shades of her personality make her a very endearing character.” Arjun Bijlani aka Ritik Raheja said, “Naagin is my second show with Balaji and COLORS, and there range of performances that I have been given the opportunity to deliver has been really diverse and extraordinary. The opportunity to work with teams which, over the months, have become family to me and the drastically different concept of Naagin, urged me to give the show a green light as soon as it was offered to me.”

Entering the picture as Sesha aka Adaa Khan said, “I like to take up characters with different shades because they give me an opportunity to explore a different facet of my personality. Sesha’s mysterious charm and her motives raise eyebrows that makes her the character to watch out for.” Sudha Chandra aka Yamini Raheja said, “I have enjoyed a long and fruitful association with Ekta Kapoor and Balaji Telefilms. When the concept of Naagin was narrated to me, the different layers of Yamini’s character really appealed to me. She is a doting mother who is religious on one hand, but on the other, is willing to go to any length to protect her family.”

Naagin will slither along the journey of a serpent woman stuck at a fork in the road between two extreme emotions – love and revenge. Beginning her journey on a conniving note, the story takes an unexpected U-turn when she falls in love with her enemy, making it difficult for her to achieve her target.

Will love triumph over revenge? Keep watching as the story unfolds…
On Naagin, starting 1st November, 2015, every weekend at 7:00 PM on COLORS