Britain’s first NHS-funded sperm bank will be opening its doors from this autumn to counter crisis of donors in the country. 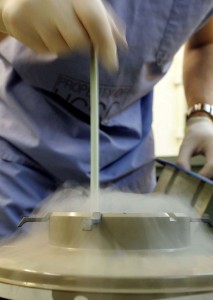 The sperm bank which will be based at Birmingham Women’s Hospital will benefit couples with fertility problems, lesbian couples and single women trying to start a family, reported The Times.

By paying £300 which is half the cost at a private clinic, users will be able to search an online database and find an anonymous donor on the basis of ethnicity, height, profession and hobbies.

The government has granted a fund of £77,000 to the National Gamete Donation Trust (NGDT) to run the bank.

Figures from the Human Fertilisation and Embryology Authority show that during 2011 a total of 4,101 cycles of donor insemination were carried out in Britain.

Out of that figure, a total of 1,271 — more than a quarter of all sperm recipients — were for women registered with a female partner.

However, the move isn’t free from criticisms.

Michael Nazir-Ali, the former Bishop of Rochester, said it would create more fatherless families. “We should not be planning for bringing significant numbers of children into this world who will not know their fathers,” he told The Mail on Sunday.

Laura Witgens, the NGDT chief executive, told The Times that the demand from same-sex couples and single women has grown exponentially.