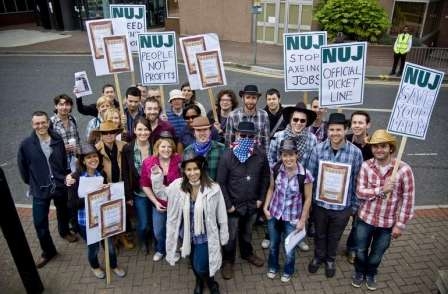 Newsquest is moving 14 editorial jobs around 140 miles from Watford to a subbing hub in Weymouth, Dorset.

The company today announced that ten subbing jobs and four planning and output staff currently based at Newsquest London (North London) are to be moved reports Press Gazette.

This comes after it emerged last month that nine editorial jobs were set to be cut, and three created, at Newsquest in Hertfordshire where four newsdesk roles were set to be combined into one at the Watford offices.

It also emerged last month that a group of 18 Newsquest titles in North London, Essex, Hertfordshire and Buckinghamshire were being put under a single group editor,Tim Jones.

In a statement, the publisher said the move marked an investment in the “installation of a new editorial system to improve operational efficiency within the business and save costs”.

Newsquest said: “The proposal is to transfer the operational aspect of the subbing function in Newsquest London (North London) and the publishing systems based at Watford to Newsquest Media Group Limited in Weymouth, Dorset. Potential redundancies may result.”

The company also said that it is proposing to “upgrade its editorial production system during end of June/July 2015” and said that new “hardware will be installed locally and training provided on the new system”.

While the move is proposed to take place in June or July, Newsquest said the precise timing will “depend on the installation of the IT systems and hardware required along with the training of all relevant employees”.

The statement said: “The proposed transfer will affect all ten subbing staff and all four planning & output staff who are presently employed at Newsquest London (North London).

“From a legal perspective, those employees will, by virtue of the Transfer of Undertakings (Protection of Employment) Regulations 2006 (“TUPE”), be entitled to transfer on their existing terms and conditions of employment and with continuity of employment preserved.

“Whilst terms of employment will not otherwise be affected, the roles will, following the transfer, be based in Weymouth.”

Press Gazette understands that all 18 of Jones’s newspapers are currently sub-edited at the Watford office.