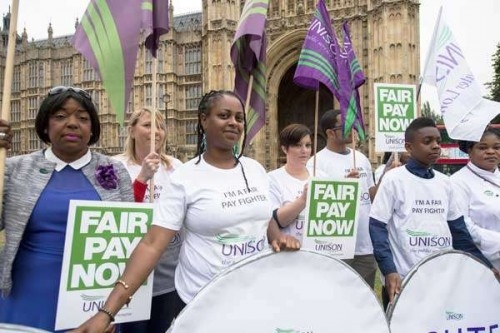 NHS nurses have warned they will take industrial action if UK Prime Minister David Cameron attempts to cut wages to fulfill his promise of a “seven-day NHS,” the Royal College of Nursing (RCN) has said.

General secretary of the RCN, Peter Carter, said the union would draw a “red line” to protect against any “attacks on unsocial hours or weekend working payments.”

Cameron renewed his pledge to create a “seven-day” health service in his first major post-election speech on Monday.

Speaking at a GP clinic in the West Midlands, Cameron said: “Our commitment is to free healthcare for everyone – wherever you are and whenever you need it.

“So I believe that together – by sticking to the plan – we can become the first country in the world to deliver a truly seven-day NHS.”

“We welcome Jeremy Hunt’s recognition that a seven-day NHS will cost money, and look forward to talking to him about how the proposals can be introduced,” she said in a statement on Monday.

“But for the government’s plans to work, ministers must find new money, not take it from the small amount of extra pay that nurses and other NHS staff get from working at night, weekends and bank holidays.”

UNISON said last month it was prepared to hold a vote amongst its members if the government attempted to cut wages to achieve a seven-day NHS.

The union represents hundreds of thousands of nurses, paramedics, therapists, porters and other healthcare professions.