Thieves have siphoned millions of pounds of fuel from a pipeline which runs under Deputy PM Nick Clegg’s official country residence in Kent, according to a report in The Sun. 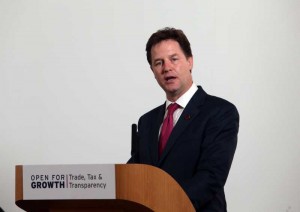 Esso’s South East pipeline runs from Fawley Refinery, in Hampshire, to Purfleet Fuel Terminal, in Essex and The Sun reported 30,000 litres of fuel a day were stolen over seven months, with a value of £8.3m at the pumps.

Kent Police said thieves had used “highly specialist techniques” to siphon the fuel. Chevening House Estate is shared by the Deputy Prime Minister and the Foreign Secretary, Philip Hammond. “We recently strengthened our pipeline security and monitoring procedures, and on Wednesday detected criminal damage at Chevening on the South East pipeline. The section of pipeline was temporarily shut down to make repairs, which have now been completed,” an Esso spokesman said.

“We strongly condemn the highly dangerous criminal action by those involved and are working closely with the police in their criminal investigations.”

A Kent Police spokesman added: “Initial indications are that this was a well-organised crime, employing highly specialist techniques to siphon fuel from pipelines which operate at very high pressure.”