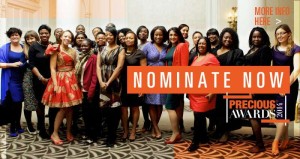 According to the IPA 2012 Multicultural Britain report, the BME community accounts for around 12%  of the overall population and has a spending power of £300 billion and rising. It raises many  questions as to why women from this section of the community are still under-represented in  boardrooms across the country. With celebrating the achievements of women who have managed  to break the glass ceiling being a key motivation behind the birth of the organisation, the PRECIOUS Awards invites all women of colour to nominate themselves or others for recognition.

With the ceremony taking place at the Institute of Directors on 22nd October during Black history month, The PRECIOUS Awards illustrate and highlight the many successes of Britain’s women of  colour, simultaneously creating role models for the next generation.  Nominations close September 5th.

Founded in 2007 by Foluke Akinlose who was awarded an MBE in 2010 for her work in recognising and supporting women of colour in business and work, the awards have been instrumental in  informing the business community and driving change.

“I am delighted once again to give my support to the Precious Awards and to congratulate those who  use their talent and initiative to start a business. Your awards will help to create great role models for  others to follow. This is vital work and you have my full support, ” said Prime Minister David Cameron.

Simon Walker, Director General of the Institute of Directors says: “The Institute of Directors is delighted to support this year’s Precious Awards. Entrepreneurs are the  lifeblood of this country’s economy and we are very much looking forward to hearing about all the  vibrant businesses set up by the Awards entrants. The IoD is firmly convinced that diversity is essential to strong corporate decision making and to strengthening the economy as a whole. We look
forward to welcoming the Award winners to the IoD.”

Significant women of colour who have been celebrated or supported the awards in past years  include; India Gary Martin, COO of Investment Banking Technology & Operations at JP Morgan,  Charlene White, journalist and ITV News presenter and Geeta Patel, co-founder and director of  Stargate Capital.
This year’s sponsors and supporters include Credit Suisse, Harvey Nash and the British Library. If you know of an outstanding woman who should be celebrated for her achievements in business or  in her chosen profession, visit www.preciousawards.com and nominate them now.
The awards ceremony will take place at the Institute of Directors, PALL MALL, on the 22nd October 2014.