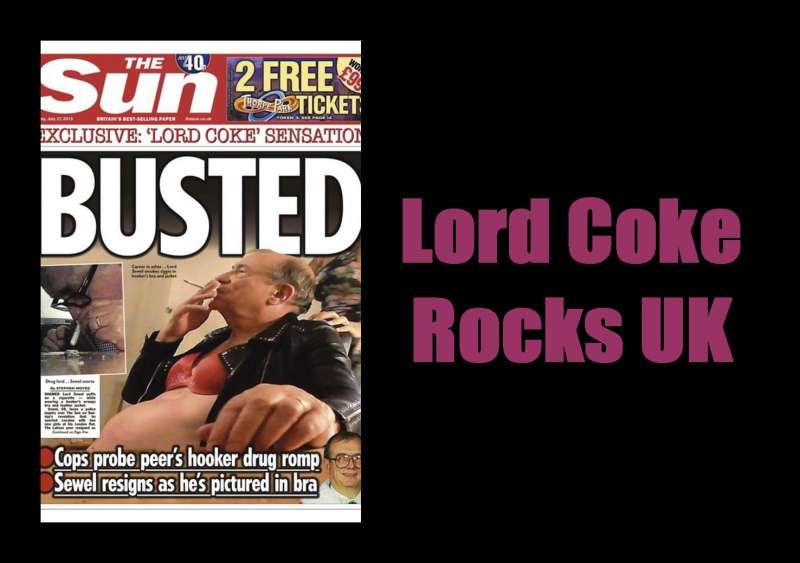 Lord Sewel is facing police enquiry over the Sun on Sunday’s footage showing g him allegedly taking drugs with prostitutes at a flat at Pimlico in London.

He branded Asian women “whores” in a shocking outburst during his cocaine-fuelled sex party. Just ten days ago Lord Sewel was trumpeting tough new punishments for peers who behave badly.

Lord Sewel, a former Labour minister who is now not affiliated to any political party, served in the Scotland office under Mr Blair’s government.

In another development, he has been urged to resign from the House of Lords by senior members. He has already quit as Lords deputy speaker and chairman of the Lords privileges and conduct committee.

Labour MP John Mann said the 69-year-old should resign from the Lords voluntarily before he was expelled.
The Sun on Monday published more photographs of the peer at the den along with details of new footage in which he is said to make disparaging remarks about a number of other politicians. The Sun front page shows Lord Sewel wearing an orange bra and leather jacket while smoking a cigarette. The original footage released on Sunday appeared to show Lord Sewel snorting powder from a woman’s breasts with a £5 note.

Lords Speaker Baroness D’Souza condemned his behaviour, saying it was “shocking and unacceptable” and the allegations would be referred to the House of Lords commissioner for standards and the Metropolitan Police.
Standards Commissioner Paul Kernaghan will gather evidence and the cross-party privileges and conduct committee will then decide on a punishment.

The House of Lords (Suspension and Expulsion) Act 2015 – which received Royal Assent only in March and which Lord Sewel himself helped to introduce – allows peers to be barred from Parliament if they breach the code of conduct. The code maintains that members must “always act on their personal honour”.

David Cameron, Boris Johnson and the four Labour party leadership contenders were among those criticised by the peer, the Sun reports.

Lord Sewel is said to have described Mr Cameron as “the most facile, superficial prime minister there’s ever been”, and Mr Johnson as “a joke”.

He is also said to have called Scottish MP Alex Salmond “pompous”, and claimed the reason former Labour Prime Minister Tony Blair took the decision to go to war in Iraq was “because he fell in love with George Bush”.

Lord Sewel was a former senior vice-principal of the University of Aberdeen has been a member of the Lords since 1996. Lord Sewel’s privileges and conduct committee role came with an £84,500 salary and meant he was in charge of proceedings when the Lords considered a bill at committee stage, and was automatically made a deputy speaker.