Hundreds of Pakistanis arrived in London in sponsored coaches on a working day to stage a major protest rally in central London…. reports Asian Lite News

Metropolitan Police and London Mayor Sadiq Khan draw flak for their failure to protect India House from Pakistan sponsored protesters in London. They were accused of hiding behind the outdated right to protest rules to justify their action.

Most of the major protesters are now taking place at Trafalgar Square. Recently the Square witnessed a major protest against the Communist state’s intervention in Hong Kong.

Hundreds of Pakistanis arrived in central London in sponsored coaches on a working day to stage a major protest against India’s decision on Kashmir. The protest was called by the Jammu & Kashmir Liberation Front (JKLF) and was supported by all Kashmiri and Pakistani groups in Britain, including the British chapters of the Pakistan Tehreek-e-Insaf (PTI), Pakistan Muslim League-Nawaz (PML-N), Pakistan People’s Party (PPP), and the Jamaat-e-Islami Pakistan (JI).

Londoners were literally surprised to see the huge number of people on protest on a working day. Several prominent Pakistani-origin politicians were absent because of the Brexit debate. Lord Nazir Ahmed or Rotherham, who is on bail in a sexual attack case, was also not present.The Lord denies all the charges and facing a trial at Sheffield court on December 2. 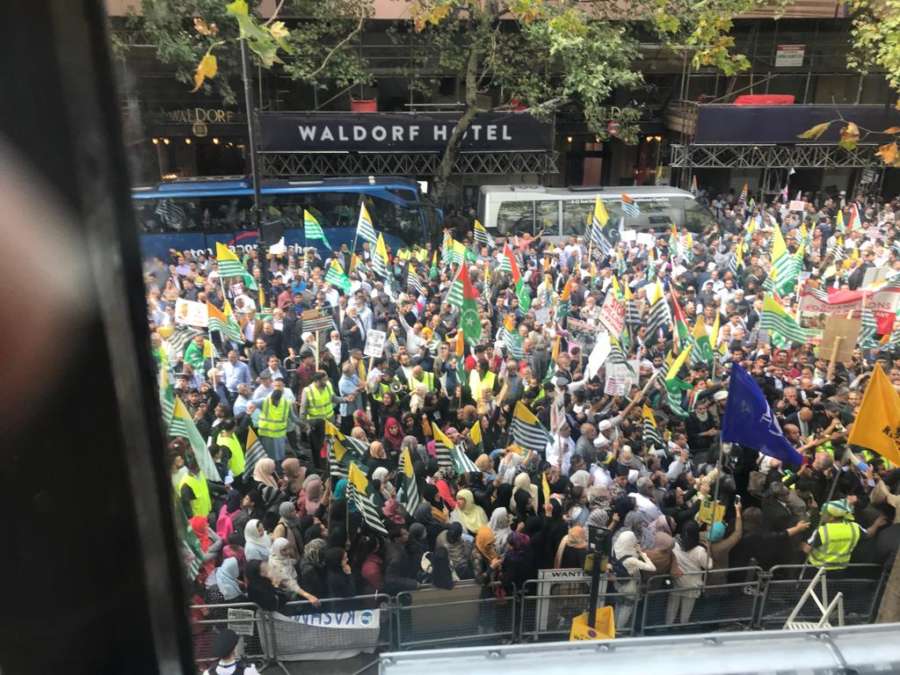 Asian Lite approaches the Police for details about the deployment and the arrests. The Met Police just confirmed two arrests and refuted to answer to other questions.

Responding to the tweet, London Mayor Sadiq Khan wrote: “It was unacceptable. I utterly condemn this unacceptable behaviour and have raised this incident with @metpoliceuk to take action.”