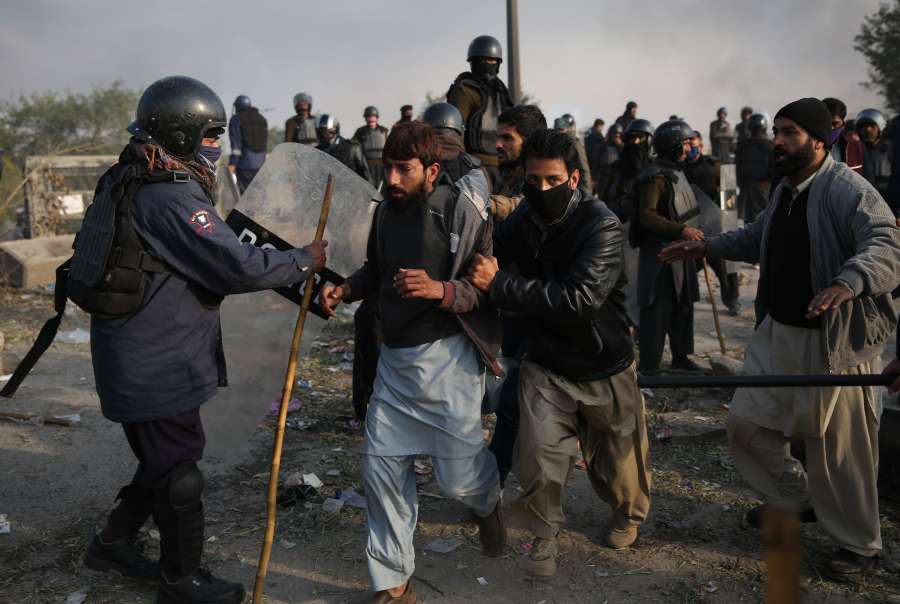 Democracy in Pakistan is at stake as Mullah​-Miilitary combine calling shots in Pakistan. They already undermined the very existence of an elected government through orchestrated protests ….writes Rifan Ahmed Khan

An unstable Pakistan is racing towards chaos. Its political leadership, with eye on the elections next summer, is helplessly and hopelessly wooing Islamists and militants. In this, it has the coercive support of the military establishment, now in cahoots with the judiciary.

It is coercive because the floundering political leadership has no choice but to take this course. And it matters little if in that process, it becomes unpopular. It is meant to be made unpopular before the elections.

The joint military/judiciary action has all but emasculated the PML (N) Government. It can neither act tough with the militants, nor can it take on the opposition. Taking the cue from this, the bureaucracy is also playing safe and on some key issues, playing footsie  with the establishment.

There are two targets. The obvious one is India that is being brought into the discourse. Interior Minister Ehsan Iqbal alleged that the protesting mullahs and militants at Faizabad, the intersection between Islamabad and Pewharar for three weeks were “in contact with India.”

He did not and perhaps could not substantiate this. He did not attempt to even bring in the intelligence agencies under his command to justify his allegation. The allegation evaporated into thin air and not repeated after the dismal failure of the police action to disperse the defiant militants.

The other target is ousted prime minister Nawaz Sharif. The ‘establishment’ is targeting the ruling Pakistan Muslim League (Nawaz) to deny any advantage of being the party in power to Nawaz, since his return to power must be stopped at any cost.

See,the way judiciary has behaved. After a bench of the Islamabad High Court questioned the army’s role and lambasted the government as a whole, seeking explanation for the utter failure to lift the violent mob at Faizabad, a bench of the Lahore High Court praised the role of the army for “saving” the country from a ‘catastrophe.’

The gainers in this joint quest are the Islamists and the establishment’s current favourite – Imran Khan.

In the process, Pakistan is unmistakably racing towards a lawless theocracy. The three-week protest was immediately followed by yet another attack at the agriculture university in Peshawar, killing nine.

The civilian government is clueless about how it was made to fail at Faizabad and how, despite all precautions, attack on the farm university campus was allowed, with a new feather in the cap of the TTP that everyone in Pakistani establishment claims to be fighting.

The role of the military, as stated above is coercive in that it is leaning on the civilian leadership to make concessions to the militants. Nothing else can explain Army Chief Gen. Bajwa’s ‘advise’ to the government, announced officially and publicly, that the latter should ‘manage’ the sit-in at Faizabad area linking Islamabad and Rawalpindi ‘peacefully.’

The announcement was made as if the army chief is not part of the government, but above it.

In which country does the army chief tender such ‘advise’ to the democratically elected government?

And, in which other country, does an army does not deploy a single soldier in response to a written ‘request’ from the government to assist in handling a volatile crowd of thousands, laying siege of the road to the seat of power, and bent on collective defiance and violence?

The army was unmoved even as six persons, including policemen, were killed and several people hurt. And now there are reports that a tent has been located on the sight of the protest where policemen were abducted and systematically tortured. The army obviously wants even the civilian men in uniform discredited in the eye of the public – and themselves.

The military is not just covertly taking upon itself a political role, it is also encouraging its peers. Raring to return home and play a political role is former military dictator of Pakistan Pervez Musharraf. Emboldened by the mess-up at Faizabad, he said that he is banned terror group Lashkar-e-Taiba’s (LeT) “biggest supporter” and that he’s aware they “like” him too.

Musharraf is only strengthening the military-militant collusion as his remarks came in the wake of the LET and JUD chief Hafeez Saeed’s release from house arrest following high court orders. Now Saeed is planning to rally the MMI, the militant combine, to participate the elections next year.

“I was always in favor of action in Kashmir and of suppressing the Indian Army in Kashmir and they (LeT) are the biggest force. India got them declared as terrorists by partnering with US,” said Musharraf in Dubai.

Not to be left behind is Imran Khan who announced that his PTI workers wanted to join the Faizabad sit-in.  This is posturing since he did not explain why he did not allow them to do so for three long weeks. This is typical of Imran and his politics.

But his pro-militant stance is unmistakable. He said his party workers were willing to join the Faizabad sit-in as “the matter had left the realm of politics”.

Khan said, “The government should know that whenever a question is raised on the finality of prophethood, there’s always a reaction of great proportions because of the religious history attached with the matter.”

He did not forget to pay tribute to his masters in uniform, and thus support their questionable role.

“The whole nation should be grateful that the matter was wrapped up in two days, otherwise there would have been a catastrophe of great magnitude and these people [the government] would have hidden out of sight leaving the nation to bear the brunt of the disaster,” Khan said.

Imran voices the military-militant collusion in supporting Hafeez Saeed. The point to note is that both Musharraf and Imran Khan, despite being old adversaries, are behind Saeed.

The second important point is that under military/militant pressure, PM Abbasi, having released Saeed, is facilitating the communication to the United Nations that has declared Saeed a terrorist.

The third important point is that the Pakistan Government has defied the US that warned against Saeed’s release and demanded that he be re-arrested. It even warned of ‘consequences’. But Pakistan has done no such thing, thumbing the nose at the Trump administration.

The US has also branded Saeed a terrorist and put a $10 million bounty on Saeed’s head after the 2008 Mumbai terror attack. While Pakistan has banned LeT, it is widely believed to orchestrate attacks in India, especially in Kashmir.

Making his government’s stance clear, Abbasi has said it is for India, which has given no hard proof so far, to move internationally against Saeed.

Pakistan state has thus washed its hands off all that Saeed has done in Mumbai terror attacks of 2008.

With militants preparing to enter the election fray, questions are being asked, by the sensible people within Pakistan and concerned world community: Has extremism truly gone mainstream in Pakistan?

The ground reality answers itself.  Each and every institution of the state has capitulated to a violent mob. This has had the effect of scuttling any last-gasp attempt at salvaging a modicum of stability in order to allow the state an opportunity to regain its composure before it can press ahead with its counter-extremism project.

There is simply no measure, no analysis and no assessment that can suggest that Pakistan is a country less threatened by extremism of any and every stripe than it was threatened by a decade ago.

More desperately, there is a real sense that the state’s capacity to even understand the scale and scope of the problem has been undermined by its head-in-the-sand approach to extremist challenges.

Over the next few months, in the run-up to the elections and in their aftermath, whatever the results, Pakistan is poised to hurtle down the abyss.