The tragedy of Sikhs is that they have not found a leader worthy of carrying forward the legacy of their illustrious Gurus since Maharaja Ranjit Singh. We are still trying to get over the fall-out from the lack of vision and leadership of Jarnail Singh Bhindranwale, now another “visionary”, Gurpatwant Singh Pannu, has appeared from America.

He now wishes to lead the Sikhs by carrying forward the legacy of Bhindranwale. No one has divided Sikhs more than Bhindrawala and also poisoned the minds of our youth who have limited understanding of our faith and history but feel angry due to the attack on the Golden Temple. Sadly, the attack led to the assassination of the then Prime Minister of India, Mrs Indira Gandhi and her death followed anti Sikhs riots in India.

Thousand innocent Sikhs were massacred in the communal riots. It is unfortunate that a so-called ‘Saint’ a man of peace and harmony could inflict massive damage to the image of Sikhs in India by considering himself to be over and above the rule of law.

Ironically, Mr Pannun, unlike Bhindrawale, carries an American Passport and Citizenship, and yet he feels for the Sikhs of Punjab. Should he not come to Punjab and lead the Sikhs personally as our Gurus did when they were fighting against the tyranny of Mughal Emperor, Aurangzeb? I am sure he will find out that the Sikhs of Punjab do not have the appetite to once again bring lawlessness into Punjab. They are still suffering the consequence of an unelected, self-appointed leader who claimed to get the Sikhs more rights than the elected Chief Minister of Punjab and what Sikhs were entitled to in a secular and democratic country, India.

Mr Pannun’s vision is to go against that of the Sikh Gurus by contradicting their philosophy. Where the Sikh Gurus believed in the oneness of the human race, Mr Pannun believes that the Sikhs are a different race and also have a different DNA to that of the rest of Indians. Sikh Gurus dedicated their lives and paid supreme sacrifices to unite us with the rest of humankind, there Mr Pannun is trying to divide us by paddling hatred against non-Sikhs of Punjab. Sikh Gurus gave us a faith which is based on interfaith teachings to demonstrate that we are all equal. Mr Pannun’s ideology is to deny non Sikhs of Punjab equality by proclaiming that Punjab only belongs to the Sikhs.

In other words, he wishes to repeat what the Muslims of India did in 1947 by declaring Hindus, Sikhs and Christians second class in the country of their birth and that of their forefathers. We all know the death and destruction that this caused in the country where people once lived side by side in perfect harmony regardless of religion. They had shared history, heritage, folklore, food, language etc. The same people have now become arch enemies and have had four bloody wars since their division with further loss of precious lives. Who knows if the area becomes a nuclear flashpoint someday such is the hatred that religious disharmony can cause.

Our illustrious father Shaheed Nanak Singh www.shaheednanaksingh.com  was a visionary and could foretell the consequences of religious disharmony. He pleaded with the then Muslim leaders not to cut and run and fall for the British policy of ‘Divide & Rule’. He said that after independence, India would be a secular and democratic country with one person one vote, and as a result, together we would make our destiny. He further warned that a country created artificially with the help of bloodshed would continue to generate more hatred for its very survival. In the words of our father,” India’s diversity is like the colours of a rainbow, its charm will diminish if one is removed”.

Mr Pannun does not believe in learning from history and would like to repeat the mistakes of the past. He seems content to see the death and destruction of 1947 happen once again in Punjab and Sikhs massacred outside Punjab just as we witnessed in 1984. He also does not seem to care what happens to the Sikh holy shrines outside Punjab as, according to him, the Sikhs should be confined to Punjab only. Does he think there will be no reaction in the rest of India against the poisonous ideology of the Khalistanis in Punjab?

It is worth remembering that the Sikh Gurus never stood for any single community not even for the Sikhs as Mr Pannun does. The Sikh Gurus always stood for humanity and as a result, are revered by the people of every faith. Guru Teg Bhadur Ji paid the ultimate sacrifice to uphold the religious freedom of Hindus in India, and Guru Gobind Singh Ji established the Brotherhood of Khalsa to defend the religious freedom of every Indian. According to Guru Gobind Singh Ji, “diversity must be accepted, respected and if need be, defended”.

Mr Pannun believes in destroying the diversity of Punjab by making Sikhs superior to the rest of the Punjabis just because they follow a different faith. He will one day advocate the removal of teachings from the Granth Sahib of non-Sikhs to make it written by only the Sikhs. He cannot imagine how people abandoned Pakistan when the majority population of Muslims made them second class to Muslims. People left their every possession to move to India, where the constitution gave them equality. Mr Pannun thinks no Hindu in business or Industry will leave Punjab when he arrives with his team of lacklustre Sikhs to proclaim Khalistan and to make them inferior. Once there is an exodus of people leaving Punjab for Rajasthan, Haryana or UP, then what will remain in Punjab? Sikhs will be treated as second class in the rest of India, the very country their Gurus and followers help to preserve as we see it today.

I hate to imagine if Sikhs are thrown out of the rest of India, how Mr Pannun and his gang will accommodate displaced Sikhs in Punjab and provide them suitable jobs. How will he be able to look after the Sikhs from the Indian Army, Air Force, Navy, Police, etc.?

I can guarantee that Mr Pannun can expect to be arrested the minute he lands in India. Instead of ruling Khalistan, he will end up spending the rest of his life in a prison somewhere in India. He will be lynched by the Sikhs who are suffering because of his anti-India rhetoric. As they say, “common sense is not so common”, and Mr Pannun certainly has no common sense to realise that he has become a foolish friend of the Sikhs; a friend we rather not have. He does not appreciate how less than 2% of Sikhs have given India, with a population of over a billion, a President, Prime Minister, Army, Air Force and Navy Chiefs; how Sikhs have businesses across India and how Sikh farmers are in UP, Gujarat, Tamil Naidu, Haryana and Rajasthan and how Sikhs have transport and freight businesses across India. 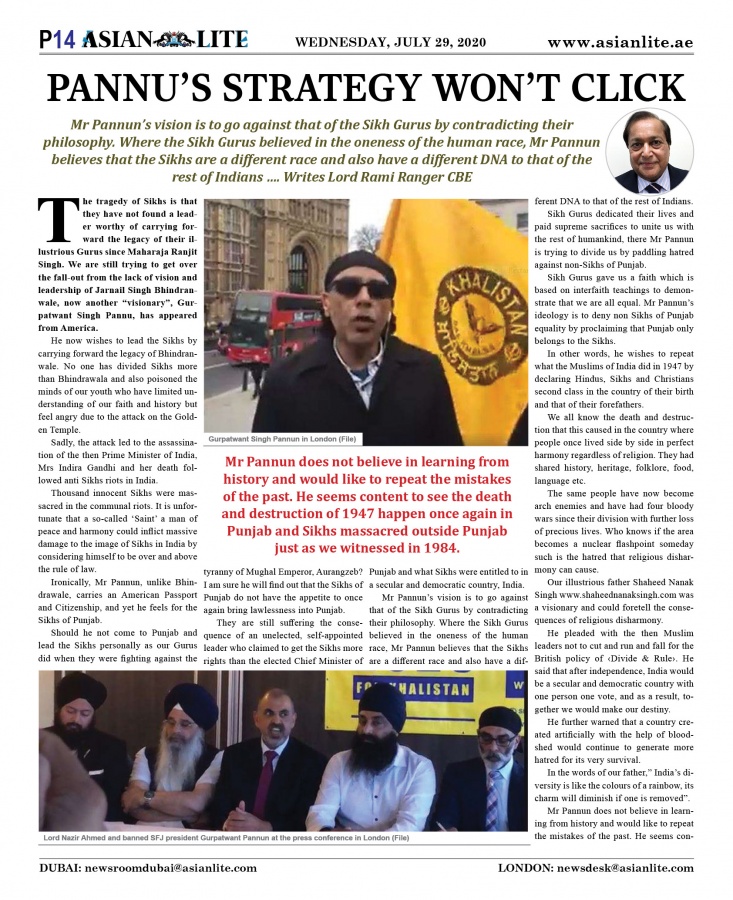 I hope and pray that a good sense will prevail and Mr Pannun apologises to the Sikhs Gurus for embarrassing them along with their followers for pursuing an agenda alien to them.