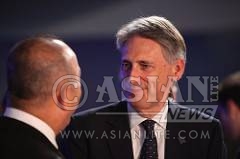 The foreign secretary is of the view that Britain needs a `dose of old fashioned pragmatism,’ reports Asian Lite News

Theresa May has secured the backing of a Foreign Secretary Philip Hammond in her bid to succeed David Cameron just one day before the first round of voting in the contest.

Mr. Hammond is reported to have hailed the Home Secretary’s `determination in standing up to vested interests’ as he threw his support behind her campaign.

He was seen as saying on Good Morning Britain that the next Prime Minister must `rebuild confidence as quickly as possible’ and `shape its new future outside the EU as soon as possible’. He added that he believes that Theresa May is the person who can do that.

Mrs. May, Mr. Gove, Stephen Crabb, Andrea Leadsom and Liam Fox will continue to vie for the support they need from MPs to make it on to the ballot paper ahead of the first round of voting on Tuesday.

The Home Secretary has been backed by a number of senior figures in the party, including Leave campaigner Chris Grayling and Defence Secretary Michael Fallon.

Mrs. May has failed to meet the Government’s target to cut net migration to the tens of thousands but Mr. Hammond insisted she was committed to controlling immigration.

He is reported to have told The Daily Telegraph, “Having worked with Theresa in government for six years, I have seen her determination in standing up to vested interests, her commitment to controlling migration from outside the EU and her tireless work to keep this country safe.

“I know that she has the qualities and the character to take our country forward and, with her quietly determined, down-to-earth style, to reunite us after the referendum, behind a plan to address the deep divisions in our society that it has exposed.”