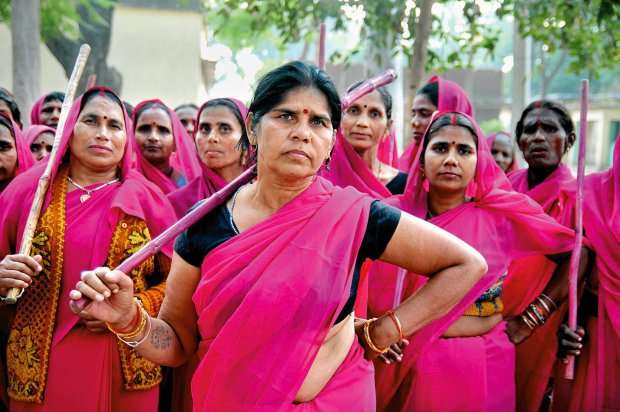 The £100,000 award is part of Art Council England’s ‘Reimagine India’ programme that aims to develop new work and collaborations between arts and cultural organisations in England and India. The project marks the 70th anniversary of the partition of India and Pakistan.

Pink Sari Revolution: A Tale of Women and Power in The Badlands of India recounts the real-life story of India’s ‘Pink Sari Gang’, an activist sisterhood and mass movement of over 20,000 pink-sari-wearing women across Northern India who fight against the oppression of women. The story centres on leader Sampat Pal and their 2010 campaign to free falsely imprisoned teenager Sheelu Nishad after she was raped by a prominent local politician.
This new award follows a grant last year which enabled research and development of the story to be carried out in Northern India.

Pink Sari Revolution will premiere at Curve in 2017, be performed in parts of India and then embark on a UK tour.

Curve Chief Executive Chris Stafford and Artistic Director Nikolai Foster said in a joint statement: “We are thrilled to have received an Arts Council England Reimagine India grant to support our adaptation of Amana Fontanella-Khan’s incredible novel. We are truly honoured to be given the opportunity to bring this remarkable story to our stage and share it with audiences across our region and beyond, following an extensive period of research and development both here and in India. Pink Sari Revolution will premiere on our stage in late 2017 before we embark on a series of national and international touring dates. As always, we are indebted to Arts Council England for supporting this important piece of work.”

Arts Council England’s Area Director, Peter Knott, said: “We’re delighted to be investing in Curve’s adaptation of Pink Sari Revolution. Our Reimagine India funding is all about helping cultural organisations strengthen their international connections by developing creative exchanges between the UK and India. With our support for this new production and tour, we hope Curve continues to attract, entertain and inspire more people at home and internationally.”