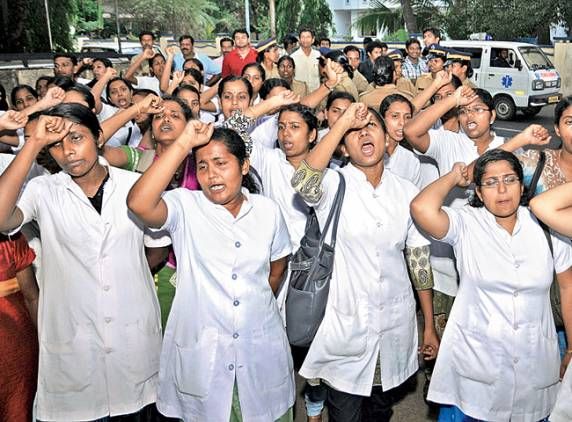 Indian nurses, the backbone of the healthcare sector, are leaving the country in droves for higher salaries abroad, mainly to  “repay education loans”.Battling with low salaries and inadequate working conditions, these Florence Nightingales of India are seeking better pay packets abroad that will benefit them and their families.With a total healthcare workforce of 2.2 million and a population of over one billion, India’s nursing density (7.9 per 10,000 population) is well below international standards and is inadequate to meet the current domestic health services needs.“Low salary is a huge issue in India. Most of the nurses who leave India, specially those from Kerala, say they have to work abroad to earn their dowry,” Neelam Deshwal, head of the nursing department at Fortis hospital, Faridabad told IANS.Deshwal, who has served for 16 years in the Indian Army, said when she conducts exit interviews at her hospital, most nurses tell her they were leaving India due to the higher salaries abroad.“They tell me that they come from middle and lower middle class families and dowry is present in their communities due to which they have to earn more money,” she said.Repayment of educational loans was another factor, she said.Concurring, Sarmma Thomas, head of nursing at Fortis Escorts Heart Institute, New Delhi, said repayment of educational loans was a huge issue.“These girls come from poor families and most of them take loans to fund their education. So they have to work abroad to repay it,” she said.She also said that many want to support their families, especially old parents.A recent study on the nursing brain drain in India says that up to one-fifth of the nursing labour force may be lost to wealthier states due to migration.As long as striking global disparities in nursing incomes persist, it will be difficult to stem the haemorrhage of nurses migrating – albeit temporarily – in pursuit of better pay, the study said.Said Preeti Trikha, a nurse at Paras Hospital, Gurgaon: “Though in India the working conditions are fine, the salary is too low.”However, things have improved over the years. Nowadays, private hospitals are paying more, she told IANS.“But I feel nursing is a dedicated profession and only people who have the courage and ability to work for long should take it up,” Trikha said.