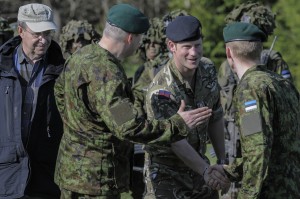 Prince Harry has broken with tradition and recorded a message of thanks on a mobile phone to the people of Brazil for the reception he received during his visit.

Royal messages after an official tour are usually letters written as the trip comes to a close.

But, in a first, Harry was filmed on a phone, with the video message posted on the monarchy’s official YouTube channel reported Sky news.

The Prince, casually dressed in a polo top, speaks without notes to the camera, with the skyline of Sao Paulo in the background.

He said: “Coming to the end of the trip, four days in Brazil, we’ve had the most unbelievable time.

“Thank you so much for all the hospitality and the warmth that everybody has shown me and all our team.

“From visiting hospitals, to visiting the rainforest to visiting Diadema, the whole trip has been absolutely amazing.

“Meeting all the children, the next generation of footballers, it’s really struck home.

“I feel very, very moved to have spent the last four days here with such amazing passionate people in such a beautiful country.

“Of course, I’ll be back again. I was here two years ago in Rio, so it’s nice to see the rest of Brazil over this trip.”