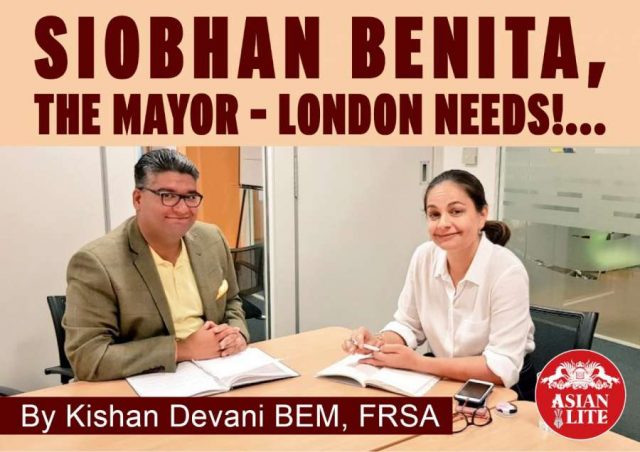 As someone who received the British Empire Medal in the New Year’s Honour’s List of 2020 For Services to Community Cohesion, I can personally endorse Siobhan as someone who wants to build bridges amongst all communities across London and passionately believe in building bridges not walls … writes Kishan Devani BEM, FRSA

The Mayor of London, Londoners need more than ever is Siobhan Benita the Liberal Democrats Candidate. Having known Siobhan now for sometime I can wholeheartedly say that, her humility, passion & care for London is second to none.

Her commitment to the diverse communities of London has been evident in her visiting of various places of worship across London & her genuine interest in promoting Unity in Diversity. As someone who received the British Empire Medal in the New Year’s Honour’s List of 2020 For Services to Community Cohesion, I can personally endorse Siobhan as someone who wants to build bridges amongst all communities across London and passionately believe in building bridges not walls. Someone who holds the values of liberal London, the values that we as Londoners hold so dearly. She would be an advocate for these values and most certainly is the only candidate on the Ballot that lives by these liberal values in her own personal life too. Siobhan’s plan for London is well thought out and covers the main concerns Londeners have now and going forward. Her three main top priorities are:

Siobhan Benita is an expert on knife crime, having been a member of the cross-parliamentary Youth Violence Commission that looked in the root causes of youth violence. Tackling knife crime will be her top priority.

She has a five-point plan that puts compassion back into the approach, investing in our young people and putting the community back into local policing.

Siobhan has been backed by Leroy Logan, the former police superintendent that quit as an advisor to Sadiq Khan because of his failure on knife crime. He said:

“Khan tried to scare people into submission and told them to ‘drop the knife or you go to prison.’ It’s not just about punitive measures. It’s also about prevention and intervention. He has let London down and we need a new mayor, and that person is Siobhan Benita.”

Reduce pollution, eradicate waste and be a world-leader on the environment.

Siobhan Benita believes London should be a world leader on environmental issues. The former civil servant, who worked on government environment policy when climate change was emerging on the international agenda, has years of policy experience to bring to the role.

She believes there is more the Mayor can do to lead by example and incentivise more environmentally friendly behaviours in the capital, like sustainable food habits.

Speaking about her vision to make London the greenest city on earth, Siobhan said: “We know that large cities have been part of the problem for our environment – but I believe they can be part of the solution too. By bringing together the green technology sector, environmental campaigners and the public sector we can achieve a London that has clean air to breathe, zero waste and is a happy, healthy place to live.”

Siobhan Benita wants to bring compassion and kindness back into the heart of politics. That means working together, listening and focusing on what we can get done for people.

She believes there is more a Mayor can do to end rough sleeping and wants to make transport fairer for lower-income and outer London commuters. Siobhan will champion our city’s diversity, by fighting to keep Freedom of Movement, and put wellbeing at the heart of policy.

In her keynote speech to Autumn Conference in 2019, Siobhan spoke about her typical London background – her mum from India, Dad from Cornwall and husband from France – and how that powers her commitment to all Londoners. She said:

“We will always celebrate London as a magnet to people from all over the world. In our kinder London, we will send a message loud and clear that we value everyone’s contribution, whether they come from Kingston or Calcutta or Croatia or, like my Dad –from the Duchy of Cornwall.” 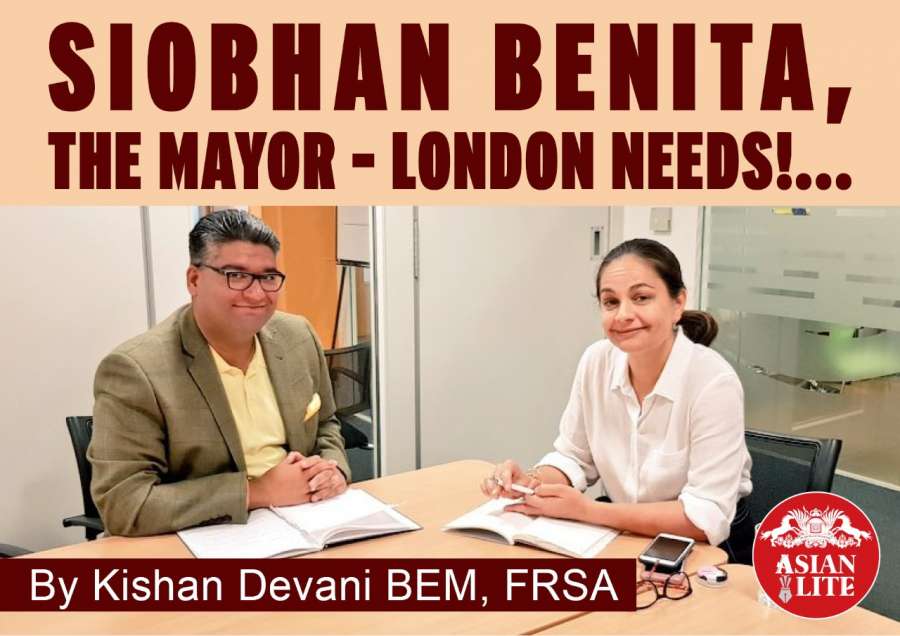 As someone who has extensive background in dealing with BaME communities across the UK not just London, I have seen the dedication of Siobhan and her compassion in wanting to understand people from all walks of life, their problems and look at strategies and opportunities to alleviate their problems. This is a vital quality for anyone seeking public office but a necessity to be an effective Mayor of a City such as London that has such diverse communities. There is no doubt in my mind that Siobhan Benita is the Mayor of London not only needs but is crying out for during these divisive times. We need a Mayor that will Unite Us and not Divide Us – Siobhan is that Mayor!