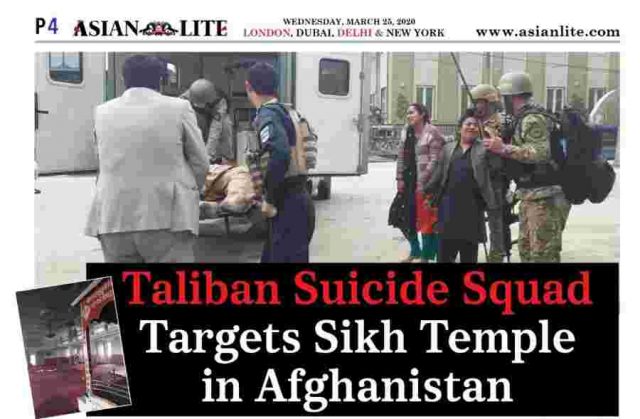 The attack on the Sikh temple carries all the hallmarks of Tehrik-i-Taliban. Meanwhile, the Ashraf Ghani government has blamed the Pakistan-backed Haqqani network for the terror attack …. Reports Asian Lite News

Punjab Chief Minister Amarinder Singh, Union Ministers Harsimrat Kaur Badal and Hardeep Singh Puri condemn the attack on a Gurdwara in Kabul in which at least 20 people were killed.

“Horrific news coming from Kabul where a barbaric terror attack happened in the Gurudwara Guru Har Rai. It’s extremely tragic and unfortunate. Request (Afghanistan) President @Ashraf Ghani Ji to find out the perpetrators and look after our people,” Singh tweeted.

The attack on the Sikh temple carries all the hallmarks of Tehrik-i-Taliban.  The Ashraf Ghani government has blamed the Pakistan-backed Haqqani network for the terror attack.

Condemning the ghastly attack, Union Minister and Bathinda MP, Harsimrat Kaur Badal said she requests External Affairs Minister S Jaishankar to issue immediate instructions to the Indian High Commission to ensure the safety of the Sikhs. “Shocked to learn about a ghastly terror attack at Gurdwara Sahib in #Kabul. I request EAM @DrS Jaishankar Ji to issue imm instructions to the Indian High Comm in Afghanistan to ensure the safety of our Sikh brethren trapped there..,” she tweeted.

In a statement here, the SAD President said as per initial reports four persons had been killed even as more than 150 Sikhs were holed up in the gurdwara complex. “These people need to be rescued even as quick action needs to be taken to bring to justice those responsible for this cowardly and ghastly act,” he said.

Reacting to the terror attack, India’s Housing and Urban Minister and a former diplomat Hardeep Singh Puri on Wednesday tweeted, “Suicide attack on a Gurudwara Sahib in Kabul needs to be strongly condemned. These killings are a grim reminder of atrocities that continue to be inflicted upon religious minorities in some countries and the urgency with which their lives and religious freedom have to be safeguarded.”

“Pakistan is supporting Taliban to attack Sikhs on prayer at Gurudwara because they want to divert media attention from the Corona shambles in the country,” said Gurjeet Singh in Kabul. “At one hand they are opening Kartarpur Gurudwara to showcase the religious harmony image to the whole world, on the other hand they are supporting terror on Sikhs to teach India a lesson. Taliban and its political masters in Pakistan must be brought to justice at international court in Geneva for crimes against humanity.”

Meanwhile, the Taliban militant group distanced itself from the attack.

“Today’s attack in Kabul city’s Shorbazar area has nothing to do with the mujahidin of the Islamic Emirate (as the Taliban fighters call themselves),” its spokesperson Zabihullah Mujahid wrote on Twitter. 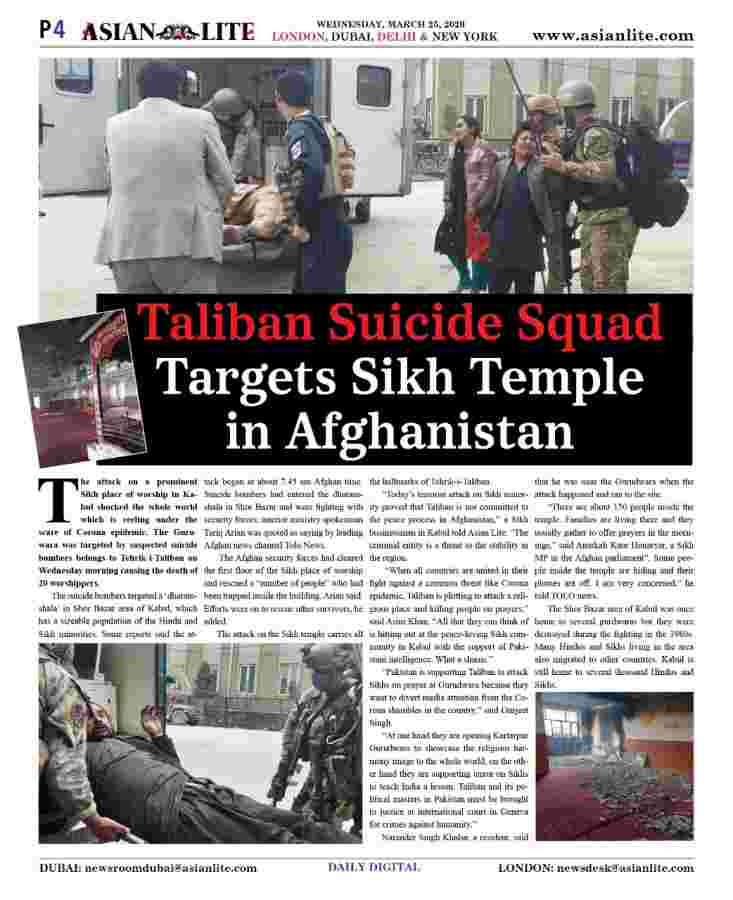